Babylon Bee Lawyers Up After Being Labeled “Fake News” Yet Again, Snopes Non-Apologizes 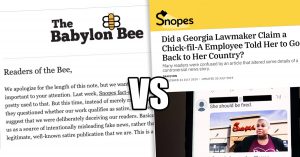 Anyone the least bit familiar with The Babylon Bee knows to check for the satire site’s name below any headline that seems too zany to be true.

Essentially The Onion for the church-going set, the satirical online publication has been offering hilarious and timely commentary on the sheer insanity going on within the church and society at large since its creation in 2016.

In fact, one of my favorite pastimes is to read the comments of nearly any BB Facebook post and catch the handful of folks who react to the outlandish headlines without ever reading the article and realizing that the story is entirely satirical.

To Snopes, however, this is a major disservice done to the online community of content-consumers, so they’ve elected to take BB down a peg or two.

After their brilliant piece resetting the Rep. Erica Thomas fiasco in a Chick-fil-A, some folks seemed to miss the whole “Fake news you can trust,” bit atop each BB article and think the story was factual.

So, once more, Snopes fact-checked The Babylon Bee, and The Bee wasn’t having it:

Last week, Snopes fact-checked us again. We’re pretty used to that. But this time, instead of merely rating the article “false,” they questioned whether our work qualifies as satire, and even went so far as to suggest that we were deliberately deceiving our readers. Basically, they treated us as a source of intentionally misleading fake news, rather than as the legitimate, well-known satire publication that we are. This is a big deal.

Folks, deplatforming is bad, mmkay? Conservative and otherwise ideologically-endangered content-creating species are already on thin ice trying to reach an audience (and therefore make an honest living) through leftist-dominated platforms like Facebook.

If Facebook listens to its buddy Snopes, who is always completely unbiased and totally transparent in their fact-checking, The Babylon Bee could very well be up a creek.

We came out on top last time, but this latest smear from Snopes is both dishonest and disconcerting. We have no choice but to take it very seriously. For better or worse, the media, the public, and social networks all look to Snopes for authoritative answers. By lumping us in with fake news and questioning whether we really qualify as satire, Snopes appears to be actively engaged in an effort to discredit and deplatform us. While we wish it wasn’t necessary, we have retained a law firm to represent us in this matter.

I know it’s up there with one of my most unpopular opinions (by the way, ask me about taxation some time), but lawyers are great. They’re always there when you need them (for a fee commensurate with their experience and education, of course), ready to rip someone’s figurative head off if they encroach on your liberties.

And, in The Bee’s case, effective.

Just a day after learning that a big, fat lawsuit might be heading their way, Snopes issued an editor’s note as a preface to their fact-check of the Erica Thomas:

Editors’ Note: Some readers interpreted wording in a previous version of this fact check as imputing deceptive intent on the part of Babylon Bee in its original satirical piece about Georgia state Rep. Erica Thomas, and that was not the editors’ aim. To address any confusion, we have revised some of the wording mostly for tone and clarity. We are in the process of pioneering industry standards for how the fact-checking industry should best address humor and satire”.

That non-apology, ladies and gentlemen, is hilarious in itself. Not only is Snopes blaming the average American for being too stupid to discover that The Bee is satire, they’re blaming their trigger-happy, reckless “fact-checking” on the choppy waters that come with “pioneering industry standards” in their field.

At this point, The Bee has not announced whether it is satisfied with Snopes’ limpwristed attempt at clarification or if they will be continuing with legal action. In the meantime, they’re happy to take another jab at Snopes, and we’re happy to read it.