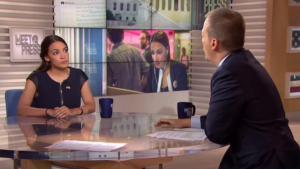 Sometimes, satire is so on the mark, it’s hard to tell if it’s actually real or not.

If you’ve ever shared a Babylon Bee article on social media, you probably know all too well that at least one person will usually comment “wait, is this real?!” because subtle satire is often missed in the age of click-bait and sensationalism.

I have to admit though that when it comes to Alexandria Ocasio-Cortez, the Babylon Bee’s recent spoof of her hilarious understanding of basic economics was so on-point, it seriously could have been a real article.

OK, maybe that’s a bit much, but still, tell me the headline Ocasio-Cortez Praises Venezuela For Making Everyone A Millionaire Through Hyperinflation doesn’t sound like it could be real.

“Venezula’s minimum wage is, like, millions per month, and ours isn’t even close to that,” she said. “Our minimum wage is, like, seven bucks or something. We call ourselves a developed country, but we don’t even just like print nearly as much money as Venezuela and give it out for free, because of businesses and corporations and things like that.”

She also called Venezuela’s leaders “really smart” for overloading the economy with more currency, and called on America’s leadership to do the same. “It just goes to show that socialism is better because you can inflate the currency to a lot more, and more is better than less, obviously.”

“It’s just common sense, and you know, like, human rights and stuff,” she added.

It’s eerie, right? That sounds just like her! After all, this quote on Nancy Pelosi is one of her greatest hits:

“She is, she is the leader of, of — no no, she, I mean, um, um, Speaker, or rather Leader Pelosi, hopefully, um, you know, we’ll see, she’s, uh, she’s the current leader of the party and I think the party absolutely does have its leadership in the House, we have our leadership in the Senate as well.”