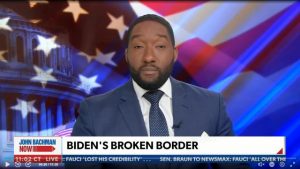 Rep. Brian Babin recently stated that President Joe Biden’s push to try and end Title 42 and other border policies put into motion by former President Trump is more evidence that the White House, along with other Democrats, are “absolutely shirking their constitutional duty and their oath to the Constitution.”

“The last tool they have in their tool chest that was given to them by the Trump administration is the Title 42 public health restrictions,” Babin stated during a chat on Newsmax’s “National Report.”

Title 42 is a public health policy that allows immigrants to be blocked from entering the country if they are coming from a country experiencing widespread disease, and Babin said the use of that rule is the “only thing that protects the American people from the spread of COVID coming across our southern border.”

Babin noted that he’s a health care practitioner and has visited the border three times, and said the increased immigration not only poses a threat from a health standpoint but because of the influx of drugs and criminal activity.

“The cartels are now de facto in charge of our border and they’re killing people,” he went on to say. “Literally, people are dying. There have been 321 migrant dead people found down there this year, and they’re asking for more body bags. This is an untold disaster that is unfolding down there getting worse and worse.”

Babin the stated that he’s quite proud of Texas for stepping up and doing what is necessary to help protect the border, “since the federal government is falling down on the job. (We are) trying to protect ourselves from literally an invasion of criminal activity of drugs. Possible potential terrorists on and on and on that are getting people killed on both sides of this border.”

Meanwhile, Democrats are not showing any moral character by allowing the immigration crisis to continue, especially considering the entry of people who are coming in without being screened for COVID or having vaccinations, said Babin.

“The only one I’ve heard so far is Democrat Henry Cuellar, who has questioned this,” said the congressman. “I saw it with my own eyes. I took a group down to the Rio Grande Valley sector. I saw a facility in Donna, Texas, that was supposed to have no more than 250 unaccompanied children at it. There were 5,700 kids in this facility. It was unbelievable. We’ve got to start protecting the American people and the state. You’re going to have to step up and do that job.”

The Texas Republican then pointed out that there’s “an excess of a million illegal aliens that have come across our border,” and while he couldn’t agree with blaming Democrats for wanting to see COVID spread, “they want illegal aliens in here and they want to enfranchise them with citizenship and the right to vote” because they want a “permanent majority.”

Babin said he’s going to present a piece of legislation that will allow block grant funds so that states along the border can “continue to construct” the wall.

“We know walls work,” he proclaimed. “It frees up so many Border Patrol agents to do the job they need to be doing. When we have a solid wall there, and the Democrats say it’s immoral, they live behind walls themselves around their own mansions. We’ve seen walls come up around the Washington, D.C., Capitol.”