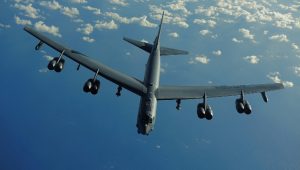 Two American B-52 Bombers flew on nonstop 30-plus-hour round trip missions from the United States over to the Persian Gulf, sending a stern and ominous warning to Iran, as a senior military official stated that new warnings of potential “complex attacks” against Americans have popped up on the one-year anniversary of our country killing Iran’s most powerful general approaches.

In a statement, U.S. Central Command said the bombers launched from Minot Air Force Base in North Dakota on Tuesday morning, marking the third time in the past 45 days U.S. Air Force bombers have flown deterrence missions over the Persian Gulf under fighter escort. The bombers flew through without incident, and Iran had not reacted publicly as of Wednesday morning.

“The United States continues to deploy combat-ready capabilities into the U.S. Central Command area of responsibility to deter any potential adversary, and make clear that we are ready and able to respond to any aggression directed at Americans or our interests,” said Gen. Frank McKenzie, commander of U.S. Central Command. “We do not seek conflict, but no one should underestimate our ability to defend our forces or to act decisively in response to any attack.”

Jan. 3 marks the one-year anniversary of U.S. Special Operations forces killing Iranian Maj. Gen. Qassem Soleimani in a drone strike in Baghdad. A recent U.S. intelligence report says Iran wants to “avenge that killing,” according to a senior U.S. military official who spoke to Fox News and a small group of reporters ahead of the bomber flight. The official requested anonymity to discuss the sensitive information.

This new intelligence about Iran is the “most concerning” data to come in since we took out Soleimani in 2019. In May of last year, U.S. officials managed to detect a sudden surge of weapons being brought into Iraq. This prompted U.S. Central Command to request that aircraft carrier Abraham Lincoln be deployed to the area.

On December 20, the U.S. Embassy in the city of Baghdad was fired upon with a bevy of 21 rockets. It’s the largest attack against the compound in the last ten years.

Immediately following the incident, Trump threatened to retaliate against Iran.

Things are getting tense over there, folks. Real tense.