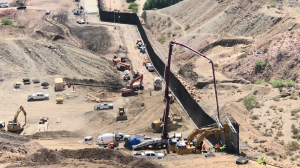 Kari Lake, Republican gubernatorial candidate in the state of Arizona, recently got on Twitter to do some good old fashioned taunting of President Joe Biden, promising to build a wall along the U.S.-Mexico border, though it isn’t clear how Lake would get the funding for such a project should she be elected to the position.

Lake, who is a former television news anchor, is now running in Arizona to replace current Gov. Doug Ducey as he is term-limited. Former President Donald Trump took a special interest in Ducey due to allegations of potential election fraud.

Lake, who he is backing in the race, backed the former president’s claims.

On Twitter, Lake backed another of the former president’s pet projects by vowing to complete his unfinished border wall.

This starts the day I am sworn into office. You ready, @JoeBiden? https://t.co/1WT2fNkl0B

On her campaign website, Lake says she is “committed to finishing the wall” and says, as governor, she would “direct the Arizona National Guard to deploy along the border and assist Border Patrol for as long as it takes to get control of this disaster.” Lake adds she would also call on sheriffs to “deputize Arizonans” to enforce state directives.

The Arizona Capitol recently called promises to build the wall by Lake and her primary rival Matt Salmon “iffy,” noting there are “seriously thorny details” a governor seeking to build a wall without federal backing would have to consider.

As a candidate for president, Biden said that “there will not be another foot of wall constructed in my administration” and halted construction after he took office. However, the Department of Homeland Security said this month that it plans to close “small gaps that remain open from prior construction activities and remediating incomplete gates.”

“Under the previous administration, the lowest estimates for the project in Arizona came in at about $9 million per mile. The state has a budget of about $13 billion. Lake, should she become governor, would need the cooperation of state legislators to divert funds to the wall’s construction, and those plans would likely be challenged by the federal government,” the report continued.

One thing’s for sure. The border crisis needs to be brought to an end and that is simply not going to happen without the border itself being sealed off with a wall.

Want to keep people off your property? Put up a wall or a fence. This isn’t rocket science.