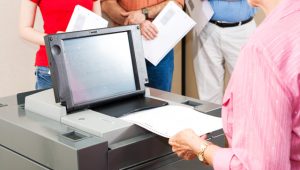 New reports have revealed that Cyber Ninjas, a company that was hired by Republicans in the state of Arizona to audit 2020 election ballots in Maricopa County, has announced it will be shutting down Thursday after a court ruling came back issuing an extremely hefty fine.

The Maricopa Superior Court found the Florida based company in contempt on Thursday. It then ordered them to comply with a previous ruling to release material that was related to a public record request or pay a $50,000 a day fine until it complied with the order.

“Yes, Cyber Ninjas is shutting down,” Rod Thomson, a spokesman for the company went on to tell the Washington Examiner.

Thomson said the decision to shut down the company came “well prior to that ruling” and declined to comment on the court decision.

Jack Wilenchik, a lawyer for Cyber Ninjas, said that the company was insolvent and could not afford to produce the requested records, an argument that did not go over well with Maricopa County Superior Court Judge John Hannah.

“The court is not going to accept the assertion that Cyber Ninjas is an empty shell and that no one is responsible for seeing that it complies,” the judge went on to say, according to the Arizona Daily Sun.

The judge also blocked Wilenchik from removing himself as the firm’s attorney. Wilenchik claimed he had not been paid by the company.

The judge also took action to block Wilenchik from being able to remove himself as the firm’s legal representation. Wilenchik then claimed that he hadn’t been paid by the company.

“Maricopa County said Wednesday in its response report to the review led by Cyber Ninjas that over 22 claims were misleading, 41 assertions the company made were inaccurate, and 13 claims that were completely false. There were fewer than 100 questionable ballots cast in the election, and there were no “systemic issues,” the county said,” according to the WE report.

CORRECTING THE RECORD ON NOV. 2020 ELECTION: We have published our comprehensive response to the Senate/Cyber Ninja #azaudit.