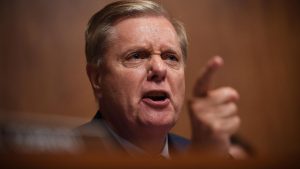 If you liked Lindsey Grahams firey new persona during the Kavanaugh hearings, you’ll love this story:

The newly rebranded “Lindsey 2.0” is set to take over from Sen. Chuck Grassley as he steps down as head of the Senate Judiciary.

The Hill reports that “Sen. Lindsey Graham (R-S.C.) is poised to become the chairman of the Senate Judiciary Committee after Sen. Chuck Grassley (R-Iowa) announced Friday that he would step down to take over the chairmanship of the Finance Committee.”

Graham praised Grassley in a tweet on Friday, writing “I very much appreciate Senate @ChuckGrassley’s leadership of the Senate Judiciary Committee. He chaired the committee with a steady hand, sense of fundamental fairness, and resolve. His leadership serves as a model to us all.”

Graham, of course, was long recognized as a classic example of a Capital Hill RINO, but something clicked when John McCain di–I mean, when he sat on the Committee that had to wade through all the muck that was the Kavanaugh confirmation.

His comments made during Kavanaugh’s testimony will go down in the annals of Congressional baddassery:

You have nothing to apologize for. When you see Sotomayor and Kagan tell them that Lindsey said hello. I voted for them. I would never do to them what you have done to this guy. It is the most unethical sham since I’ve been in politics.

You have interacted with professional women all your life, not one accusation. You’re supposed to be Bill Cosby when you’re a junior and senior in high school. And all of a sudden you got over it. It’s been my understanding that if you drug women and rape them for two years in high school, you probably don’t stop.

Boy y’all want power. You want this seat? I hope you never get it. I hope the American people can see through this sham.

Graham, a longtime Trump ally, will also have control over the Mueller investigation, and, after meeting with interim Attorney General Matthew Whitaker, says he’s “confident” Mueller will not be fired as he (for some reason unbeknownst to God and man) continues his investigation.

This is going to be a fun two years.