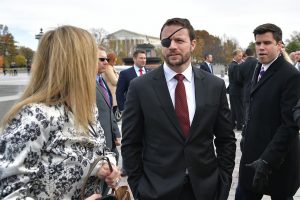 Congress is full of freshman Representatives who are eager to make their mark before doing any actual work, like Alexandria Ocasio-Cortez who was selling her 70% tax hikes and $3 trillion health care plan before she got elected, much less sworn in, or Rashida Tlaib, who apparently would like to be remembered as the Representative who celebrated her first day in the House by calling Trump a “motherf*cker.”

Meanwhile, there’s Representative Dan Crenshaw, who first appeared on national news after his incredibly gracious response to being mocked for his eye patch on SNL, and has already positioned himself as a rare voice of reason, decency, and American values in the House.

Ahead of the partial government shutdown, which is heading into this fourth week, AOC made a big fuss about how members of Congress shouldn’t get paid during a shutdown so as to make them take the possibility thereof more seriously.

Next time we have a gov shutdown, Congressional salaries should be furloughed as well.

It’s completely unacceptable that members of Congress can force a government shutdown on partisan lines & then have Congressional salaries exempt from that decision.

This was actually one of the best ideas she’s had, and, once the shut down ensued, several members of Congress, on both sides of the aisle, requested that their salaries be withheld or donated their salaries to favorite charities.

Rep. Crenshaw was among them, making this announcement this week:

I cannot in good conscience get paid while federal employees’ financial futures hang in the balance because of this partial government shutdown. I’ve asked the Chief Administrative Officer to withhold my pay until we have come to an agreement to adequately fund border security. pic.twitter.com/2g37vAAtx2

So, you may be asking, what became of AOC’s paycheck?

“It’s unclear if the democratic socialist has actually taken the step to reject her paychecks as Crenshaw has,” The Daily Wire explains.

“In fact, when she was asked about this by reporters from The New York Post, she refused to answer, telling them, ‘I’ve gotta run!’ She has also refused to respond to other media inquiries into her paycheck status.”

Meanwhile, Crenshaw is not only openly refusing his paycheck, he’s working hard to make sure federal employees once again receive theirs as soon as possible…with a wall:

Great meeting with President's Chief of Staff Mick Mulvaney, where he assured Texans that he understood the deep concerns about using Harvey relief funds for the border.

I don't usually recommend that people watch CSPAN, but Minority Whip @SteveScalise is absolutely worth watching right now. He makes a clear and coherent case for border security. Dems won't negotiate even one dollar, and they are holding federal workers hostage as a result.