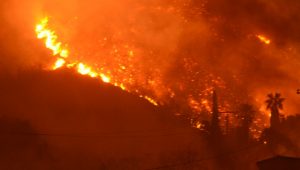 Four individuals have now been arrested on suspicion of arson on the West Coast, particularly in areas that are being ravaged by massive, destructive blazes.

Wildfires continue to rage out of control across three different states, and now police are investigating the possibility that some of these incidents may have been started by two men in Washington state, a man in Oregon, and a woman in California, all of whom are now facing serious charges.

Police accused Michael Jarrod Bakkela, 41, of starting a separate fire near the railroad tracks in Phoenix, Ore., Oregon Public Broadcasting reported. In a statement, the sheriff’s office said that while the Almeda fire burned, “residents witnessed Bakkela lighting a fire behind their house on Quail Lane.”

Anita Esquivel was arrested in Monterey County, Calif., after starting fires near Highway 101, though the number of fires was not released, according to KION.

Two other unidentified men have been arrested in connection with fires in Washington. One man is alleged to have started a blaze on State Route 167 at Meridian, while the other individual, caught a day later, allegedly started a fire at State Route 512.

Folks, it’s entirely possible that extremist left-wingers have started these fires on purpose to help push some sort of liberal cause, whether that be for climate change legislation to be passed or to simply try and oust Trump from reelection victory in November.

That may not be it at all. We could just have some unhinged individuals on our hands. Either way, this is disturbing.