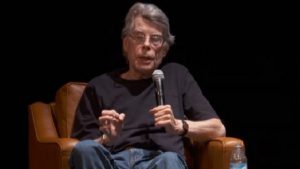 King is an outspoken liberal who seems to really have a passionate distaste for our current commander-in-chief, spending an unusually large amount of time shredding him on Twitter, which is his preferred social media platform.

Artists like King are fully entitled to their opinions — that’s the beauty of the First Amendment — that doesn’t mean their comments come without any consequences. Sometimes, even though you have the right to say whatever you want, you should just stay quiet. You know, out of respect for other people and to display a little human decency.

Unfortunately, King did not heed this bit of wisdom, opting instead to attack the marriage of President Trump and First Lady Melania, right after it was revealed she was recovering in a hospital from kidney surgery.

The horror author (who hasn’t written a good book in decades) took to Twitter on Monday to post a cruel and disgusting joke about First Lady Melania Trump, who had just undergone emergency surgery for a kidney ailment — a surgery that will keep her in the hospital for a week.

“Not to be snarky, but Melania can probably use a week’s rest from Blabbermouth Don,” King tweeted. “Sounds heavenly to me,” he wrote moments after the White House announced the surgery.

Not to be snarky, but Melania can probably use a week’s rest from Blabbermouth Don. Sounds heavenly to me.

Judgment from fellow Twitter users was swift and without a whole lot of mercy:

Where is the civility?

Must be miserable to have your president in your head 24/7. Is it really enjoyable for you to be so hateful all the time? Doesn't it get old??

Look. There’s more to life than politics. This should go without saying, but unfortunately, everything these days is politicized and it seems people have lost sight of their shared humanity and have instead decided to view people’s value as coming from their stance on policy.

But there’s more to this life than that. We are all human beings who should be able to connect with each other, regardless of our political differences, based on the shared experiences we all have. Surely it’s still possible for two human beings to empathize with one another in their suffering?

King has missed an opportunity here to heal some of the division in this country by wishing Melania well in recovery, by walking in her shoes and recounting his own suffering after his accident in the late 90s early 2000s.

We’re already split enough. We certainly don’t need more divisive rhetoric like this that looses sight of our shared journey through life.