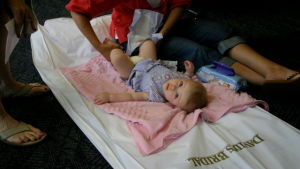 I think what’s going on in modern feminism is that they’re so dissatisfied that with all their finger-wagging and lecturing and marching with their tops off over the years, men are still pigs and “sexually liberating” women hasn’t exactly helped…well, anything.

Rather than admit fault and change their methods, however, feminists just double-down on them, and things are getting a little crazy.

An Australian feminist recently took to Australia’s ABC to inform the world that consent starts at home.

Deanne Carson, a so-called “sexuality educator” said that parents should be working on establishing a “culture of consent” at home, and one great way to start doing this is to ask infants “I’m going to change your nappy now, is that okay?”

“Of course the baby is not going to respond, ‘Yes mum, that’s awesome. I’d love to have my nappy changed’,” she added. (I was wondering how that was going to work)

“But if you leave a space, and wait for body language and wait to make eye contact, then you’re letting that child know that their response matters.”

OK, first of all…

I don’t even know where to begin to be honest.

And I’m not the only one–LAD Bible reports that Sky News commentator Rowan Dean was astounded at this suggestion once he caught wind of it, and called it “lefty lunacy”.

“Here we go, Ross,” he said to his co-host, adding: “A consent for changing nappies – I think that might get a bit, uh… Anyway, I won’t go there.”

Pretty much the best reaction any reasonable person can muster.