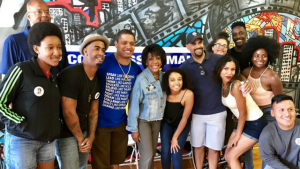 Whether she’s marching for abortion because her mom couldn’t have one, or she’s planning on impeaching Trump as soon as you’re elected President, she’s always good for a few hoots.

Maxine Waters, the spitfire octogenarian who famously represents an area of Los Angeles that she does not herself reside in, is up for her, we’re guessing around 68th re-election as a California representative, and she’s pulling out all the stops.

Waters has been the star of countless incoherent sound bites since she decided to “hitch her wagon to the Resistance movement” as the folks over at The Daily Caller put it.

She has vowed not to rest until Trump is impeached, evidence not necessary. She’s sure someone will come up with it sooner or later. And it’s got to be hard for her not to rest–our senior citizens love their naps!

In an apparent effort to attract the millennial vote, Auntie Maxine recently hosted a “tweet-a-thon” in Los Angeles where dozens of people were in attendance.

Oh wait, I’m sorry, forgive me that was a dozen. One dozen people. At least this is what it appears in her own footage of the event, posted to Twitter Sunday.

“Come join top social media influencers for a tweet-a-thon in support of Auntie Maxine, our fearless champion in Congress who taught us how to reclaim our time! We are coming together to amplify congresswoman Waters’ voice and highlight her many achievements throughout her career. Millennials come energized & ready to get out the vote!” read the flyer for the event.

If this is any indication of how energized Waters’ millennial base is, she might want to reconsider her campaign strategy.