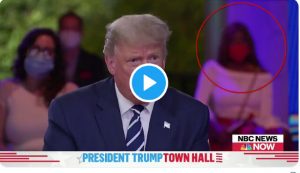 A member of the audience who attended the town hall event for President Trump held by NBC News found herself going viral on social media after viewers noticed her nodding in agreement with the president and giving him the thumbs during a rather hostile exchange with moderator Savannah Guthrie.

Fans of Trump loved what they saw and began to spread the video and story of her support all across the Internet.

The woman, identified by the Miami Herald as Mayra Joli, is an immigration attorney, former beauty queen and pro-Trump activist who ran for Congress in Florida in 2018.

Whoever this woman is nodding her head – we stand with her! pic.twitter.com/By1TJf0uy8

WHO IS RED MASK LADY???? LOVE HER! https://t.co/DgTAKExmNS

Joli was able to speak to the president after the town hall ended, according to a video she posted on her Facebook page, the Herald reported.

“We have your back! You see, you see, you are the best,” she told him while he was speaking to voters afterward. He asked her where she’s from and said he appreciates the support.

Some folks in Biden’s camp weren’t pleased about Joli being included in the town hall audience, citing it was supposed to mainly be for individuals that were undecided in who to vote for. However, Guthrie later noted there was a smattering of both Biden and Trump supporters in the audience.

Then liberals went on to accuse Joli of being a plant:

Same. This woman is nodding at things before he’s even finished his thought. It’s a psychological trick and I cannot believe no producer, no camera person, NO ONE is stopping it

I've been tweeting about it nonstop to @NBCNews. But she became even more animated..am surprised the online director didnt notice it..or maybe she was planted there🤔.

Back in 2018, Joli stated that the president was her inspiration for running for Congress, which just goes to show you how much of an influence our commander-in-chief is having on folks across this great nation.