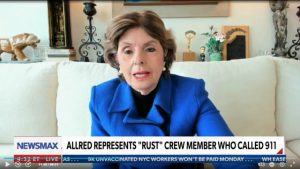 Attorney for script supervisor on the film “Rust” Mamie Mitchell, Gloria Allred, made an appearance on Newsmax where she stated that there are still a lot of questions that need to be answered before “final conclusions” can be reached as to what was the ultimate cause of the death of Halyna Hutchins, the cinematographer on the film.

Allred went on to say during an interview on Eric Bolling: The Balance on Monday that Mitchell actually came very close to being hit by the stray bullet that killed Hutchins, ”but fortunately, she had the presence of mind, even though she was in shock, to run out of the church … [and] call 911, and her voice is on that recording.”

”We have a lot of unanswered questions, and we would like to get to those questions and those answers, and so far we don’t really have all of the answers,” she added.

But Allred added what has been reported is that ”the armorer, who by the way is the person on movie sets who was supposed to hand a gun to the actor, and Mamie says that in her 40 years as a script supervisor on set where guns are located, she has never seen an assistant director hand it to the actor.”

Regardless of whether Alec Baldwin, who was holding the gun when it fired, will be charged with a crime, Allred said, ”there’s a potential for liability in a civil lawsuit. So this has to be investigated to see what that liability would entail.”

Additionally, Allred noted that the armorer, Hannah Gutierrez Reed, ”said ‘there was no live ammunition,’ as far as she knew. Then her attorney kind of says, ‘well, she had two jobs, that it was hard and all of that.”’

”But the assistant director admits, by the way, that he didn’t check all of the rounds,” and he should have, Allred went on to say, if he’s the one ”handing the gun to Alec Baldwin.”

Allred then asked, ”Did Alec Baldwin also check the gun? … And if he didn’t, why not? And if he did, what did he see? And also, why did that gun go off? Because guns don’t go off by themselves. So how did that happen?”