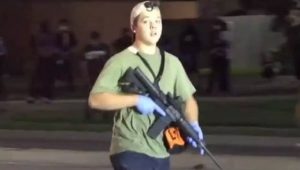 Kyle Rittenhouse’s attorney has revealed that the teenager is currently residing at a safe house with his family after receiving “numerous threats” after prosecutors alleged that he had violated the terms of his bail.

Prosecutors in Wisconsin are trying to get an arrest warrant and to possibly increase his bail to $200,000 for Rittenhouse after detectives in Kenosha found out that the teen was no longer living at the court-listed address on February 2. The young man’s defense team has filed a motion on Wednesday that rebuts the prosecution.

The defendant’s attorneys said that Rittenhouse had been moved to a safe house citing “numerous death and other threats based on the events of August 25, 2020 in the City of Kenosha, Wisconsin,” the motion said, according to CNN.

Former Rittenhouse attorney John Pierce signed an affidavit saying that because of the threats, “arrangements were made for the Rittenhouse family to reside at a ‘Safe House’ in an unidentified location.” Pierce went on to claim that a Kenosha police captain said he “‘absolutely should not’ provide the address of the Rittenhouse Safe House on [Rittenhouse’s release forms after posting bail], but to instead provide his home address in Antioch, Illinois.”

Rittenhouse’s defense team tried to file a change of address for the teen and give the court the location of the safe house under seal, but the request was denied, according to emails reviewed by CNN.

An email exchange was filed by attorneys for Rittenhouse between himself and Kenosha prosecutors that dates back to November 30, 2020, in which the lawyers write, “Mr. Rittenhouse will need to update the court on a change of address, because of security concerns, we would like to keep that information away from the general public. I wanted to know if you would agree to allow the filing of the change of address with the court under seal?”

Assistant District Attorney Thomas Binger later wrote in response, “Wisconsin has a proud history of open records and government transparency, and I am reluctant to make an exception to the normal practices. Unless you can provide me with a specific, tangible and imminent threat (or threats) that would justify secrecy in this case, I am not willing to agree to redact your client’s address from the public record.”

Rittenhouse was arrested after he allegedly killed two men and wounded a third during a riot that took place in the city of Kenosha in 2020. He’s been charged with two felony counts of homicide and one count of felony attempted homicide.

These folks are desperate to hang this young man out to dry any way they possibly can. It’s clear they want to ruin his life. All for trying to defend himself from left-wing attackers. What a tragedy.