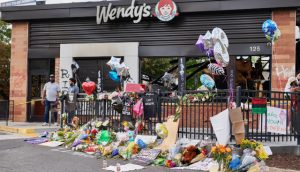 Atlanta Mayor Keisha Lance Bottoms has decided to take action and shut down the Black Lives Matter “occupied zone” that exists around a Wendy’s restaurant located downtown, which is also the site where Rayshard Brooks, was shot and killed during an encounter with police officers last month.

Bottoms ordered the area cleared after an 8-year-old girl was allegedly killed by protesters on Sunday.

Yes, that’s right folks. The individuals screaming and crying about how much black lives matter snuffed out a young black life. This, of course, isn’t shocking when you look at the volume of black on black crime that exists in America and how the BLM movement seems to conveniently ignore all of the black children being murdered in abortion clinics across the countrys.

The young girl, Secoriea Turner, was killed when her mother exited the freeway and turned into a parking lot playing host to the “occupied” protest similar to the one that cropped up in Seattle’s Capitol Hill neighborhood early in June. Protesters reportedly swarmed the woman’s vehicle and fired a number of shots at the family, hitting Secoria.

Just hours after that incident, police returned to the “occupied” zone to investigate yet another shooting, this one involving a group of adult males. Three people were wounded in that exchange of gunfire, a local Fox affiliate reports, and one person was killed.

Bottoms held a press conference on Sunday evening and ordered the “occupied” zone to be cleared out and also declared that protesters would not be able to set up a long-term camp at the site where Brooks died.

“After a night of a dozen shootings, including one in which an 8-year-old girl was killed, Atlanta Mayor Keisha Lance Bottoms on Sunday said protesters could no longer occupy the Wendy’s where a police officer shot and killed Rayshard Brooks last month,” Fox News reported Monday.

“Now we are demanding action for Secoriea Turner, and all other people who were shot in Atlanta last night,” the mayor continued. “Enough is enough. If you want people to take us seriously and you don’t want us to lose this movement, we can’t lose each other.”

“At the point that an 8-year-old baby is killed, the discussions have ended,” she stated poignantly.

These protests have grown out of control. Of course, they were like that from the moment of their inception. However, it’s clear this isn’t really about preserving black lives. It’s about political power. Plain and simple.

Someone, somewhere is manipulating these folks and using their cause to further their own agenda. It’s time to shut it all down.