Atheism Is At An All Time High, And We’ve Never Been More Miserable 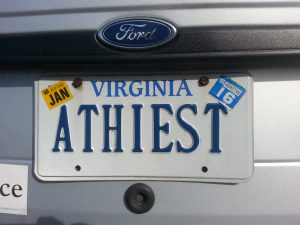 The America of 2019 is so far removed in every possible way from its 250-years-ago self that, if it were possible, the hand of God himself would be the only thing stopping our Christian forefathers from coming down from heaven to personally smack us all upside the head.

While assorted deists like Thomas Paine have held their seat in America even as far back as the war for independence, the thought of humanist materialism was as utterly nuts back then as it is today.

Still, if there’s a God, that means He runs the show, and people don’t tend to like that too much. So, for the first time in American history, atheists are now the largest religious group in America.

According to the General Social Survey, the delusion of godlessness has shot up by 266% over the past 30 years. Atheists now account for 23.1% of the country’s population, edging out Catholics and kitchen-sink Evangelicals as the nation’s religious, or anti-religious, majority. This development goes hand-in-hand with the sharp decline of mainline Protestant denominations whose numbers have tanked by 62.5% since the early ’80s and now account for only 10.8% of the U.S. population.

All y’all atheists might want to hold your applause, though. Following the upward curve of atheism in the country is the downward curve of mental health, revealing a massive surge in mental illness and suicide.

We’re living in a society that is wise in its own eyes. We think we’re better than God and, therefore, we’re forsaking his blessings, and we’re seeing that clearly in our anxiety, depression, drug addiction, and suicide rates.

That isn’t to say that brothers and sisters in the Lord who, due to no lack of faith whatsoever, don’t still wage that war against the flesh that, in some cases, manifests itself in these ways. That there’s a whole other issue that much smarter folks have already filled pretty good books about.

According to The Daily Wire:

Nearly one in five American adults suffers from anxiety disorders, which now constitute the most common mental illness in the country. One in six Americans takes antidepressant drugs, a 65% surge over just 15 years. The problem is particularly acute among younger Americans. While depression diagnoses have increased 33% since 2013, that number is up 47% among Millennials and 63% among teenagers. Coincidentally, suicide rates among American teenagers have increased by 70% since 2006. American life expectancy declined again last year, as Americans continue to drug and kill themselves at record rates.

I know, I know, “correlation does not equal causation,” but it sure as heck doesn’t forbid causation. Even if religion were solely therapeutic and didn’t have eternal ramifications (which is a problem itself, but don’t let me start preachin’, now) it makes perfect sense that belief in a higher being who’s got the whole world in his hands would make for a happier, less stressful life.

Scientists and psychologists and all kinds of other -ists have long touted the clear link between faith and well-being. Social psychologist Sonja Lyubomirsky observed that people who attend religious services several times each week are nearly twice as likely as those who don’t to describe themselves as “very happy.”

Yes, folks, that is what we call “fellowship,” and my, oh my, does it do the soul good.

“Religious people are also significantly more likely to engage in happy-making behaviors, such as getting and staying married,” The Daily Wire continues, shooting down the tired Hollywood trope of the miserable married couple. “A study released in 2017 affirmed what countless others had already shown: married couples report higher life satisfaction than their single, divorced, and widowed neighbors. That satisfaction tends to last beyond the honeymoon and well into old age.”

Our Founding Fathers had an incredible revelation that we’ve woefully lost. This nation was designed to be a God-fearing one; it’s imprinted in our social DNA. “Our Constitution was made for a moral and religious people,” revolutionary and former president John Adams said in 1798. “It is wholly inadequate to the government of any other.”