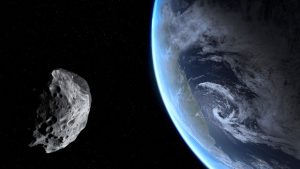 With the kind of year that 2020 has turned out to be, there shouldn’t be anything that happens that really surprises us, right? I mean, we’ve had a pandemic, race riots, government admission of the existence of UFOs, murder hornets, and all sorts of wild, wacky things.

But it seems this year is not through with us yet.

According to astrophysicist Neil deGrasse Tyson, we could have an asteroid hit the earth the day before the presidential election.

Could you ask for a better summary of the year politically speaking?

An asteroid with a diameter the size of a refrigerator could strike the Earth the day before the November election, according to celebrity scientist Neil deGrasse Tyson — but it’s not large enough to do any serious damage.

The famed astrophysicist said the space rock, known as 2018VP1, is hurtling towards Earth at a speed of 25,000 miles per hour and may clip the planet on Nov. 2.

“It may buzz-cut Earth on Nov. 2, the day before the Presidential Election,” he wrote on Instagram.

But he added that the flying object is nothing to lose sleep over since “it’s not big enough to cause harm.”⠀⠀⠀

Okay, so it may not be large enough to cause some sort of cataclysmic event like the one that allegedly killed the dinosaurs, but how about some other sort of disaster, like “Night of the Comet?”

Heck, would the dead rising from the grave to consume the flesh of the living really be all that shocking at this point? Probably not.

Then again, we have enough zombies roaming around as it is. They’re called Democrats.