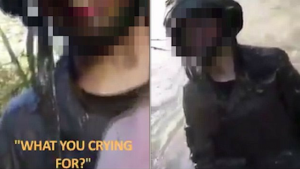 Whatever happened to equality?

You can’t have it both ways, ladies.

England has become a terrifying dystopia of political correctness, and yet, political correctness is what’s completely imploding in the center of an outrage over a British Army Instructor facing court martial for treating a female recruit the way male military recruits have been treated for decades, nay, centuries.

“According to the Daily Mail, the unnamed instructor can be seen in a video yelling at the soldier as she was failing at a bayonet exercise. Due to the verbal abuse, she begins to cry,” Conservative Tribune reports.

The instructor filmed the woman without permission and she identifies herself in the video, as she is reduced to tears over the instructor’s “abuse,” as the Daily Mail was quick to label the instructor’s berating. The video went viral, being viewed at least 300,000 times on social media.

Lord Dannat, the former head of the British army, called the video “totally unacceptable”, expressing hope that the instructor would swiftly be put to justice.

“Imagine, for instance,” he states, “this woman out in the battlefield, unable to use her bayonet. That could cost lives, her own being one of them. You’re angry that one of your military instructors told her to ‘show me your war face’ and then berated her when she couldn’t really do it.”

Here’s the thing: the reason this video is evocative is because the recruit is a woman, and in civilized Western society, try as we might, no one wants to see a woman treated like a man because we have a culturally embedded instinct not to oppress women, but to protect them.

And one of the reasons men have been able to protect women since the beginning of time is because they tend to handle this kind of verbal “abuse” much better and use it to build courage and tenacity as they prepare to face their enemies on the battlefield.

There are men and women who both can and can not endure the kind of “abuse” this recruit experienced in the viral video, and it’s not unheard of for certain women to develop the character and inner strength to endure life in the military…but it’s not common. And there’s nothing wrong with that!

What they don’t realize is that “toxic masculinity” defends borders, wins wars, defends the weak, and brings justice to the world. Without the accomplishments of men who have endured psychologically stressful training on their paths to becoming valiant warriors, true equality and liberty would have never been established in the West as it is today.

So, what’s the moral of the story here? Men and women are fundamentally different, and this is utterly undeniable.

How much more proof do you need?