‘Are You Kidding Me?’: Fauci Shoots Down Hugh Hewitt’s Push For Him To Resign 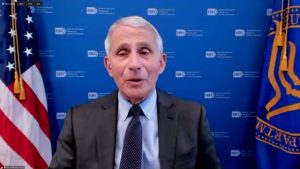 Dr. Anthony Fauci, who is the chief medical advisor to President Joe Biden, recently made an appearance on the radio program of conservative host Hugh Hewitt, where he repeatedly rejected the host’s push for him to resign from his position based on the assertion he has become a stumbling block to raising up vaccination numbers.

“This is difficult for me, but I want to run down for your benefit. The controversies since the virus started include the botched testing at the beginning, no research on masks for children in primary care, the J & J pause, the controversy over the use or non-use of Ivermectin, and there was no study yet completed,” Hewitt went on to say during the program, according to a transcript of the episode. “The no discussion of natural immunity which exists and ought to be out there, the discussion of herd immunity which has switched back and forth, the mask discussion at the begging, don’t wear masks, the noble lie and then wear masks, now equity issues in the FDA panel’s scientific discussion.”

“From day one, we had no idea that a virus that could actually kill so many people, would be completely asymptomatic in about 50-60% of people, and that many of the infections, almost half, were transmitted by people who had no symptoms. That’s where the mask situation got all muddled,” the head of the National Institutes of Allergy and Infectious Diseases continued. “When people are looking for definitive answers in an evolving situation, it doesn’t work that way, Hugh. It just doesn’t.”

Hewitt responded that the mask issue is just one part of the larger issue of Fauci’s credibility with the public. The radio host said that the doctor has lost credibility with right-of-center people and that his advice would not compel those Americans to get vaccinated.

“Can you accept that if that’s just a fact, you ought to respond to it and say, Mr. President, I think my time is up as a successful and effective spokesperson?” Hewitt asked.

Hewitt continued to press his point and received more denials and rejections from Fauci.