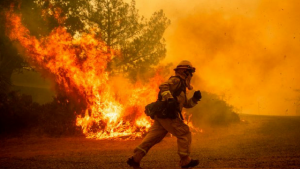 If you’re a Christian, or simply a sensible person, you understand that as humans we have a moral obligation to be good stewards of the earth in which we reside.

Far-left environmentalists want you to believe that people on the right don’t care if the planet is destroyed as long as we can profit off of it (I mean, we all get those big fat oil money checks in the mail every month just for being Republicans, right?), but in reality, they’re idiots and obviously we all live here and would prefer to see our planet preserved so we and our children can continue to live here.

The thing is, not only is the idea of human-caused climate change is based on a lot of highly-questionable data, it also seems to inevitably result in eco-fascism.

“Hotter, drier, longer forest fires we are witnessing today have nothing to do with dangerous manmade climate change. They have a lot to do with idiotic forest mismanagement policies and practices,” The Daily Wire quotes Paul Driessen, the Senior Policy Advisor of CFACT, as saying, in the very compelling California Burns: The ‘New Normal’ Thanks To Obama-Era Environmental Regulations.

They point to dramatic forest management regulations introduced by the Obama administration in 2012, not long before the rise in California wildfires began to increase.

In 2016, Paul Driessen explained in a piece for Town Hall:

Eco-purists want no cutting, no thinning – no using fire retardants in “sensitive” areas because the chemicals might get into streams that will be boiled away by conflagrations. They prevent homeowners from clearing brush around their homes, because it might provide cover or habitat for endangered species and other critters that will get incinerated or lose their forage, prey and habitats in the next blaze. They rarely alter their policies during drought years.

The resulting fires are not the “forest-rejuvenating” blazes of environmentalist lore. They are cauldron-hot conflagrations that exterminate wildlife habitats, roast bald eagle and spotted owl fledglings alive in their nests, boil away trout and trout streams, leave surviving animals to starve, and incinerate every living organism in already thin soils … that then get washed away during future downpours and snow melts. Areas incinerated by such fires don’t recover their arboreal biodiversity for decades.

Since the Clinton administration, aggressive over-regulation of the logging industry and the production of products like paper, furniture, and construction materials have done little to “save the planet” and a lot to bog down the free market and create hazardous forest conditions that make it more difficult to properly manage the land.

Barth and Grimes explain that these eco-fascists simply don’t understand how to properly steward the land, opting instead to try and bar anyone from interacting with it at all, which compounds the difficult task of preventing forest fires.

“So-called environmentalists have a very narrow view of nature, not recognizing that without proper land management, which means an appreciable amount of logging, they are actually hurting wildlife and the long term health of the forest and endangering human lives,” they conclude. ”

“Yet, environmentalists believe that people cause climate change, so maybe this is just punishment (environmental justice) in their never-ending and destructive quest for sustainability.”