Are Democrats Giving Up on Pretending They’re Not Far-Left Socialists? 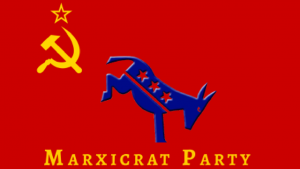 As the right has been largely unified and galvanized in the midst of a movement driven by, but much larger than, Donald Trump, the left has decided to just crank their repellant Marxist politics all the way up to eleven.

This is somewhat understandable, considering the difference between the enthusiasm for 2016 Democratic presidential candidates Bernie Sanders vs. that of Hillary Clinton.

Sanders’ base was energized and passionate, driven by the “Occupy” movement and the youthful ideals of “income equality” and general feelings of “revolution.”

Clinton’s supporters, on the other hand, mostly just thought she would win because she was a Clinton and wanted to “break the glass ceiling.”

Clinton was booed by Sanders supporters at the DNC when her candidacy was announced. Enough said.

So Democrats are throwing up their hands and going full-socialist, Kyle Smith explains over at National Review.

The Democratic love of socialism was for many years the love that dared not speak its name. No more. Now the party is figuratively jumping on Oprah’s couch shouting its love of socialism. You’d have to plug your ears not to hear it.

Socialist Bernie Sanders is unquestionably the spiritual leader of the Democratic party, which is radicalizing itself in his image, and on the strength of her blowout Democratic-primary win over liberal incumbent Joe Crowley in the party-ruled NY-14 congressional district, soon-to-be-congresswoman Alexandria Ocasio-Cortez is now one of the most prominent faces in the Democratic party. A poll last fall put support for socialism at 44 percent among Millennials, and even more disturbingly, 23 percent of this group agreed that Joseph Stalin is a “hero.” Socialized medicine, i.e., Medicare for all, is the hottest issue on the Left (unless you count hating Trump as an “issue”).

In short, Democrats are who we thought they were. They’re just losing their inhibitions about it. As the woke-youth site Vox puts it, “Maybe Democrats should stop being afraid of the left” because “Ocasio-Cortez’s victory is a big sign that Democrats can run on socialist ideas and win.” Talk of revolution flows naturally. After Justice Kennedy announced his retirement, MSNBC’s Chris Matthews said, “I tell you, the Democratic base is wired now for a revolt.”

There’s only one problem: we know they’re Marxists, and the thinly-veiled far-left politics are what drove many voters towards Trump in 2016.

What makes them think blatant Marxism will help them any more?