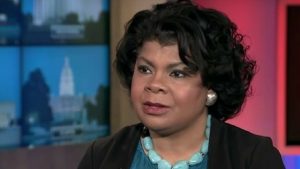 Ah, the perpetual victimhood of the left.

April Ryan, who you may remember from that time she thought Sarah Sanders wanted to fight her, would probably be the most notorious White House correspondent if it weren’t for Jim Acosta, has claimed that her life is in such peril, she needs a bodyguard.

And that Sarah Sanders should pay for it.

It’s definitely kind of ironic that a member of the press would pin it on Sarah Sanders when her life feels threatened, considering Sanders is the first press secretary in history who has required protection from the Secret Service.

It is also Sanders who was harassed in and booted from a DC-area restaurant, not Ryan.

But here’s a little secret: Ryan has a book coming out. So there’s a good chance she’s just saying whatever she can to get her name in the headlines.

Remember when reporters just stuck to reporting the news?

“I’ve had death threats. I’ve had craziness … Do I have a bodyguard? Yes, I do. Am I paying for it? Yes, I am. And, I think [Sanders] should have to pay for it, especially if she’s stirring it up with her boss,” she added.

Ryan, who is a White House correspondent for American Urban Radio Networks, did not state why her employer is not paying for her security.

The reporter is currently promoting her book, “Under Fire: Reporting from the Front Lines of the Trump White House,” due to be released next month.

“What’s happening is unprecedented. I am a member of the press corps, one of the deans of the press corps now… I’ve been under attack. And lied on. Treated terribly. And if I don’t tell the story, you won’t get it. So, I’m putting it out there, because people see one side of it,” said Ryan.

“They’re still very angry at me for asking the question, ‘Mr. President, are you a racist?’ And that’s why I’m on a list,” she claimed. “Since when is asking a question of a president making you a criminal? Or making you an ‘enemy of the people’?”

Here’s my question: who’s threatening Ryan? The press spends all their time searching like a needle in a haystack for evidence of Trump’s racism, and yet they’ve somehow failed to report on Trump supporters harassing members of the press?

They pinned the Maryland newspaper shooting on Trump, somehow, but they somehow glossed over all these Trump supporters threatening April Ryan?

Seems pretty suspicious to me.

But anything goes when you’re a liberal with an agenda…victimhood, along with making other people pay for their stuff, is their political currency.