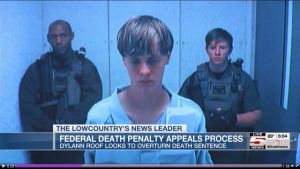 A federal appeals court has ruled in favor of upholding the death sentence for convicted Charleston church shooter Dylan Roof on Wednesday against a plea from his legal team which sought to vacate the punishment.

Well, that’s not exactly a shock. The guy killed a bunch of people. The death penalty is sort of deserved here, don’t you think?

A three-judge panel of the U.S. Court of Appeals for the 4th Circuit in Richmond declined to return Roof’s case to a lower court as his legal team sought a competency evaluation of Roof, arguing that he was mentally unfit when he represented himself in court during his sentencing after being convicted of killing nine people inside a black church in South Carolina in 2015.

Roof, now 27, was “under the delusion” that he would ultimately be “rescued from prison by white-nationalists — but only, bizarrely, if he kept his mental-impairments out of the public record,” his attorneys argued.

The court ruled, however, that U.S. District Judge Richard Gergel did not err when he ruled Roof competent to represent himself.

“Dylann Roof murdered African Americans at their church, during their Bible-study and worship,” the judges wrote in their opinion of the case. “They had welcomed him. He slaughtered them. He did so with the express intent of terrorizing not just his immediate victims at the historically important Mother Emanuel Church, but as many similar people as would hear of the mass murder.”

Roof was sentenced to death back in January of 2017 over the killings.

“All of the judges who sit on the 4th Circuit Court of Appeals recused themselves from the Roof appeal, according to the Associated Press. Judge Jay Richardson, who prosecuted roof’s case as U.S. assistant district attorney and called him ‘an extraordinary racist,’ is a 4th Circuit judge,” the WE report said.

“The group of judges that issued Wednesday’s ruling comprised judges from other circuits who sat in for the recused 4th Circuit judges,” the report continued.

While the death sentence for Roof has been upheld, there’s still a chance it could be appealed up to the Supreme Court.

President Joe Biden, along with Attorney General Merrick Garland have expressed that they are not supportive of the death penalty. The Justice Department has moved to pause federal executions back in July, pending a new review of the policies and procedures that are connected to the process.