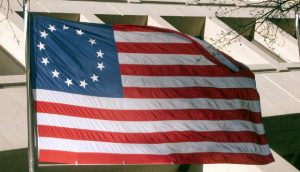 Nine Line Apparel, a company owned by a veteran, has given the most perfect response to the controversial decision by Nike to remove one of their shoes featuring the Betsy Ross American flag after former NFL quarterback turned social justice warrior Colin Kaepernick complained about it.

Has anyone else just completely grown tired of all the ridiculously stupid political correctness nonsense that has infected practically every facet of our lives here lately?

The apparel store is also “calling on Americans to boycott Nike and to display their patriotism with the hashtag #NoToNike.” As reported by The Daily Wire on Tuesday, a #WalkAwayFromNike boycott gained traction online when Senator Ted Cruz (R-TX) similarly asked Americans to refrain from buying Nike goods.

Army CPT (ret.) Tyler Merritt, CEO of Nine Line Apparel, slammed the athletic gear giant for seeking “profit through controversy, but with absolutely no regard for the consequences.”

“In its corporatist wake, it leaves behind anti-American sentiment and division, harming our country,” Merritt said in a statement. “But since Nike has no interest in displaying the Betsy Ross flag, a classic symbol of freedom and unity, then we proudly will.”

It’s such a sad time to be an American. Once upon a time the American flag, which is a symbol of the principles we supposedly hold dear as citizens of this great nation, was something that would unite us together under a common identity. Not any more.

Thanks to the ugliness and moral degeneracy of leftist ideology, we’re a divided nation and it is truly tragic.

Many men and women have died in order to preserve the flag and the principles she stands for and when folks like Nike and Kaepernick disrespect that symbol, they disgrace those who sacrificed it all to ensure our nation stayed free.