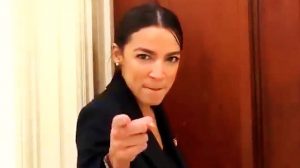 On Thursday evening, President-elect Joe Biden revealed his COVID-19 relief plan, called the “American Rescue Plan.” This relief package will costs a whopping $1.9 trillion and will include an additional round of $1,400 stimulus checks for individual American citizens.

The plan will allocate $130 billion in funds to help reopen schools, another $25 billion to assist with rent payments, and then an additional $20 billion help with expanding coronavirus testing.

Oh, and let’s not forget the wish list item of increased federal minimum wage to $15 per hour.

And yet, according to Rep. Alexandria Ocasio-Cortez, it’s still not far enough.

While Republican backlash was to be expected, the bill has also drawn criticism from many on the Left. Though Biden had promised $2,000 checks ahead of the Georgia runoff elections, actual proposed payouts fall $600 short. In a Thursday interview with the Washington Post, Representative Alexandria Ocasio-Cortez called for retroactive unemployment benefits and was quick to point out the bill’s shortcomings: “$2,000 means $2,000. $2,000 does not mean $1,400.”

Though majority of Democrats have expressed their support, including Senator Bernie Sanders, who praised the plan as a “very strong first installment,” others on the progressive fringe of the Democratic Party have backed Ocasio-Cortez’s call for more radical relief. Among them are freshmen Cori Bush of Missouri and Jamaal Bowman of New York who complain Biden’s plan does not go far enough. Both tweeted Thursday night in support of AOC’s demand of $2,000 stimulus checks. Given the Democrat’s slim 222-211 majority in the House, party unity could prove crucial to the bill’s passage.

In other words, Biden isn’t socialist enough for AOC’s tastes. What she really wants is for the incoming administration to throw capitalism in the toilet and institute a cradle-to-the-grave kind of governmental system.

This is what she’s pushing for. A universal monthly income from the federal government. What these bleeding hearts do not consider is the fact that this isn’t free money. It has to come from somewhere.

And if you tax businesses to death, well, they die. Then you have no money coming in to fund your system and eventually the whole thing will collapse. It’s common sense.

Oh. Right. This is AOC we’re talking about.