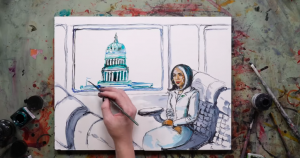 Believe me, folks. There’s nothing the whole of the news blogging community would love more than to cover bigger issues than what a delusional, neo-socialist freshman congresswoman says every other day. Truly. Every time we think, “alright, that’s enough of Alexandria Ocasio-Cortez for a while,” she goes and says something offensive, stupid, or just wildly and hilariously ignorant.

This week, she certainly didn’t diverge from that pattern. In fact, she jazzed it up a bit with a hilariously self-important video presentation (with pretty pictures for us folks who don’t read good) on what the future would be like if her pet legislation, the Green New Deal, had passed.

AOC partnered with The Intercept, an unapologetically biased “adversarial journalism” outfit, to create a fictional short film set in the future in which the congresswoman serves as narrator and looks back on her imaginary success and bravery in passing the GND.

Except, you know, the GND was dead in the water and literally could not grab a single Senate vote. But that’s an ignorable detail in AOC’s future socialist dystopia.

In the insanely self-absorbed video, Ocasio-Cortez is depicted riding a bullet train to DC, reminiscing about her first days as a legislator in the “most diverse Congress in history”. Without an ounce of humility, she describes how she “inspired children”—perhaps the only demographic with a loose enough grasp of math to understand the unfeasibility of her plan?—to follow her lead as a leftist visionary.

Eventually, in AOC’s rewrite of history, she was able to pass the Green New Deal, although it faced heavy opposition because people were “scared” of change.

“It’s often said you can’t be what you can’t see. I think there was something similar with the Green New Deal. We knew that we need to save the planet and that we had all the technology to do it, but people were scared,” AOC said in the voiceover. “They said it was too big, too fast, not practical. I think that’s because they just couldn’t picture it yet.”

Completely ignoring the fact that society simply can’t afford a $93 trillion-dollar debacle like the GND (that’s $65K per household, people), AOC instead blames the bill’s failure on big oil companies who spread misinformation and lies in order to save their bottom line. She even throws in her classic “12 years until doomsday” narrative for good measure.

Now that she’s completely botched her retelling of actual history, AOC moved forward with her Brave New World-reminiscent tale of the future, starting with the 2020 election: “The wave began when Democrats took back the House in 2018, then the Senate and the White House in 2020 and launched the decade of the Green New Deal.”

With her soft-spoken, kindergarten teacher voice, AOC tells of children who become “eco-warriors,” then grow up to have careers in green energy, all while using gentle, flowery language to describe the social programs everyone lives under in this socialist hellscape.

As hilariously self-important and delusional as the video and its creators are, I want to urge y’all to take this future socialist paradise scheme as seriously as AOC does, especially when it comes to voting against every future iteration of the GND. Something tells me she ain’t giving up on that dream any time soon.