AOC Blames US Embargo For Oppression In Cuba, Breaking With Biden 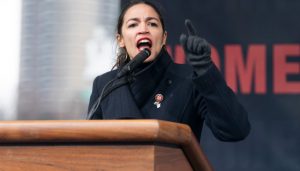 Democratic New York City Congresswoman Alexandria Ocasio-Cortez stated on Thursday that the failed U.S. embargo against the communist nation of Cuba is to blame for the oppression and civil unrest the country is currently experiencing, going on to criticize President Biden for deciding to uphold the trade restriction.

She then called out “gross violations of civil rights” by the current Cuban regime, though she also shredded the United States, especially the president, for upholding the decades long trade embargo, which was actually put in place to destabilize the communist government, after the U.N. called on the U.S. to end the trade ban for the 29th consecutive year.

“We are seeing Cubans rise and protest for their rights like never before,” Ocasio-Cortez wrote in her statement. “We stand in solidarity with them, and we condemn anti-democratic actions led by President Diaz-Canel. The suppression of the media, speech, and protest are all gross violations of civil rights.”

“We must all name the U.S. contribution to Cuban suffering: our sixty-year-old embargo,” she continued. “Last month, once again, the U.N. voted overwhelmingly to call on the United States to lift its embargo on Cuba. The embargo is absurdly cruel and, like too many other U.S. policies targeting Latin Americans, the cruelty is the point. I outright reject the Biden Administration’s defense of the embargo. It is never acceptable for us to use cruelty as a point of leverage against every day people.”

The organization accused the U.S. of causing instability through historic economic embargoes that led to “pain and suffering” for Cubans over nearly 60 years. The group praised the Cuban government for granting black revolutionaries asylum in the past.

“Black Lives Matter condemns the US federal government’s inhumane treatment of Cubans, and urges it to immediately lift the economic embargo,” the group wrote Wednesday.

“The extortionist ring known as the Black Lives Matter organization took a break today from shaking down corporations for millions & buying themselves mansions to share their support for the Communist regime in #Cuba,” Rubio said in a tweet that was published on Thursday.

The president has promised to stand with the people of Cuba in their battle to obtain “fundamental and universal rights.”

“We stand with the Cuban people and their clarion call for freedom and relief from the tragic grip of the pandemic and from the decades of repression and economic suffering to which they have been subjected by Cuba’s authoritarian regime,” Biden said in a statement Monday. “The Cuban people are bravely asserting fundamental and universal rights. Those rights, including the right of peaceful protest and the right to freely determine their own future, must be respected. The United States calls on the Cuban regime to hear their people and serve their needs at this vital moment rather than enriching themselves,” he said.