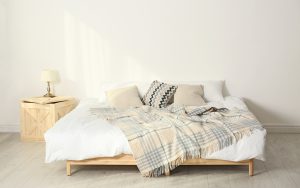 Another day, another act of protest the left apparently hasn’t thought through very well.

After it was discovered that Wayfair was selling furniture to U.S. migrant detention centers at the southern border, some seemingly well-intentioned employees of the online furniture store are staging a walk-out.

“Employees of the Boston-based online housewares giant Wayfair announced Tuesday that they would stage a walkout at the company’s Back Bay offices Wednesday to protest the company’s decision to sell furniture to operators of facilities for migrant children detained at the southern US border,” the Boston Globe reported.

An unnamed Wayfair employee told the Boston Globe that people were “disheartened” to learn last week that BCFS, the government contractor managing the detention centers, placed a $200,000 order for bedroom furniture with the site.

In response to the news, employees drafted a letter to the company which reads, in part:

“This particular order, for over $200,000 worth of bedroom furniture, is destined for Carrizo Springs, Texas, to a facility that will be outfitted to detain up to 3,000 migrant children seeking legal asylum in the United States… The practice of detaining children and adults at our Southern border has been condemned since its inception but since the acceleration of the practice in 2018, and the increase in death and injury that has come with that acceleration, we have seen more vocal condemnation of the practice. We, the undersigned, are writing to you from a place of concern and anger about the atrocities being committed at our Southern border.”

Wayfair management responded to the letter on Monday, highlighting the “importance of respecting diversity of thought within our organization and across our customer base.”

“As a retailer, it is standard practice to fulfill orders for all customers and we believe it is our business to sell to any customer who is acting within the laws of the countries within which we operate,” their letter said. “We believe all of our stakeholders, employees, customers, investors, and suppliers included are best served by our commitment to fulfill our orders.”

Dissatisfied with that response, an unclear amount of Wayfair employees are scheduling a walk-out protest.

Naturally, folks like Rep. Alexandria Ocasio-Cortez are lending their full support (in the form of outraged tweets and good vibes, anyway) to the cause:

They asked the company to stop. CEO said no.

This is what solidarity looks like – a reminder that everyday people have real power, as long as we’re brave enough to use it. https://t.co/667abeLDTG

For starters, AOC thinking that the employees of Wayfair are actually making the beds reminds me of the days when my younger children thought that the cashiers at Walmart actually make all of the products in the store. Adorable in 4-year-olds, not so much in congresswomen.

Second, is AOC so bent on making her “concentration camp” statements closer to the truth that she wants to actually make detention centers resemble them?

If these facilities weren’t anything like Nazi work camps before (and literally every expert who has spoken on the issue has said they’re not), they’re sure as hell closer to it now that AOC and Wayfair protesters seem to want children sleeping on bare floors.