AOC and Ted Cruz Are Cooking Up Common-Sense Legislation Together, Temperatures In Hell Start Dipping 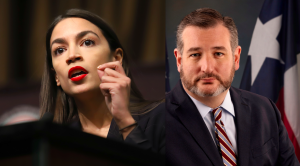 Let’s face it: there are simply too many non-negotiables on which leftists and conservatives disagree too strongly to ever fully cooperate.

Both wings of the American political bird are convinced that the other is trying to rob folks of basic human rights and will surely cause the destruction of our civilization (or even our world). It can be awfully depressing to know that a major branch of the entity tasked with governing you is too busy with partisan battles to actually govern effectively.

Once in a while, though, moments happen that make you stand up, take notice, and—dare I say it—feel a little bit more hopeful.

An incident on Twitter led me to have one of those moments, and it was so wild I almost didn’t believe it at first.

Rep. Alexandria Ocasio-Cortez, that cauliflower-chastising freshman representative we love to hate, is actually aiming to reach across the aisle and draft common-sense legislation with none other than conservative Republican Sen. Ted Cruz.

Ocasio-Cortez tweeted on Thursday about her disgust for the overwhelming tendency of former congressmen and senators who find new careers as lobbyists and suggested that, if not banned outright, there should be a “long wait period” for former legislators who aspire to start influencing public policy from the outside.

If you are a member of Congress + leave, you shouldn’t be allowed to turn right around&leverage your service for a lobbyist check.

I don’t think it should be legal at ALL to become a corporate lobbyist if you’ve served in Congress.

At minimum there should be a long wait period. https://t.co/xMu9Mwmdm6

Whether or not AOC knew beforehand that boarding the revolving door shut has long been a pet cause of Texas Ted’s is anyone’s guess. At any rate, the dude noticed AOC’s complaint and took the opportunity to chime in and up the ante to a lifetime ban on lobbying by former legislators.

Here’s something I don’t say often: on this point, I AGREE with @AOC Indeed, I have long called for a LIFETIME BAN on former Members of Congress becoming lobbyists. The Swamp would hate it, but perhaps a chance for some bipartisan cooperation? https://t.co/jPW0xkH2Yy

From there, Ocasio-Cortez made a promising offer to cooperate on serious legislation to combat this plague on politics:

.@tedcruz if you’re serious about a clean bill, then I’m down.

If we can agree on a bill with no partisan snuck-in clauses, no poison pills, etc – just a straight, clean ban on members of Congress becoming paid lobbyists – then I’ll co-lead the bill with you. https://t.co/AZTbmdSexv

Now, it may seem as though AOC’s emphasis on avoiding “snuck-in” clauses and “poison pills” assumes bad faith on Cruz’s part. Maybe she’s hesitant to trust a mean, nasty, cow-fart loving conservative? Who knows. Ted didn’t care, he just wants to get the job done, and responded with the class we expect from him:

Cruz and AOC weren’t alone in the bipartisan plot—Sen. Brian Schatz (D-HI) and Rep. Chip Roy (R-TX) also voiced serious interest in getting down to business.

My staff is reaching out to yours. Let’s do this. https://t.co/IU4zIUbWyN

With a bipartisan team in each of the two houses of Congress, this could be a promising effort.

Cruz, Ocasio-Cortez, and the rest of the stalwart conservatives and leftists can fight another day. Believe me, there’s still plenty of fodder for that.

For now, let’s be thankful that at least something is getting done in Congress.