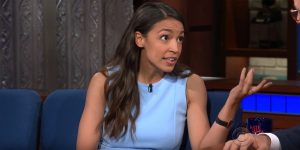 Rep. Alexandria Ocasio Cortez and her team of socialist miscreants are already hard at work applying pressure to get demands from the Biden transition team, even though Biden hasn’t even won the election yet, and the polls are very much up in the air.

Progressives, the diehard kind, are very adamant that if Biden wins the election, his administration need to include some of their influence, especially due to deals that were made earlier in the year that enabled Joe Biden to get enough support from the hardcore left — who really wanted Sen. Bernie Sanders — to cinch the nomination to take on President Trump.

AOC is on tape stating she and her cronies are going to “push” Biden further to the left if he gets a victory over the president.

“We’re different people, and clearly I, in the primary, one of the reasons why I was supportive of Senator Sanders was because of how progressive his stances are, but, you know, the primaries are over, and right now what is most important is to make sure that we ensure a Democratic victory in November and that we continue to push Vice President Biden on issues from marijuana to climate change to foreign policy,” she told news outlets last month, per the Daily Wire.

Now, according to POLITICO, she and other members of the “Squad” — including one prospective member who has yet to win an election — have signed on to an open letter demanding that Biden compile a far-left transition team devoid of CEOs and other corporate bigwigs, even if they are instrumental in setting up a new government.

“Left-wing House members including Reps. Alexandria Ocasio-Cortez, Katie Porter, Ayanna Pressley, Raúl Grijalva, and candidate Jamaal Bowman along with 39 progressive groups signed a letter, obtained by POLITICO, arguing that no C-suite level corporate executives or corporate lobbyists ought to have Senate-confirmed positions in a Biden administration,” the outlet noted Friday.

“One of the most important lessons of the Trump administration is the need to stop putting corporate officers and lobbyists in charge of our government,” the group stated. “As elected leaders, we should stop trying to make Tunsupportable distinctions between which corporate affiliations are acceptable for government service and which are not.”

If you don’t think progressives are still on-mission when it comes to seeing our republic destroyed and replaced with a democratic socialist foundation, you’re not paying attention. These folks want to destroy our nation and strip away liberty, all in the name of socialism. It’s terrifying.