“Antifa” — The Worst Elements Have Come to the Top! 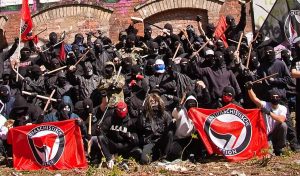 The average American would be flummoxed if asked to identify the new far-left movement that is beginning to sweep our country called “antifa.” Sean Illing reveals the identity of “Antifa” (which is short for “anti-fascist”) as “a loose network of left-wing activists who physically resist people they consider fascists. These are often the scruffy, bandana and helmet-clad people who show up at alt-right rallies or speaking events in order to shut them down before they happen, and they openly embrace violence as a justifiable means to that end.

“Antifa is not a monolithic organization, nor does it have anything like a hierarchical leadership structure. It’s an umbrella group that shares a number of causes, the most important of which is resisting white nationalist movements. Adherents are mostly socialists, anarchists, and communists who reject turning to the police or the state to halt the advance of white supremacy.”

Thomas J. DiLorenzo, is professor of economics at Loyola University Maryland. In a recent article titled, “The Worst Elements of Society”: America’s Bolshevik Wannabes,  DiLorenzo identifies the “antifa” participants for what they are — the worst elements that have come to the top in our society: “They’ve attacked and beat up elderly people attempting to attend Trump-for-President rallies; attacked people with solid iron bicycle locks, bike racks, clubs, rocks, mace, baseball bats, and bottles filled with urine and feces. They threw cement blocks through storefront windows in D.C. on inauguration day, claiming it to be a protest against capitalism. They’ve set police cars, civilian cars, and buildings on fire to interrupt campus speeches by conservatives. They hospitalized a female university professor for the “crime” of inviting conservative political scientist Charles Murray to speak at Middlebury College.

“They organize a riot whenever a conservative or libertarian is invited (by students, never by faculty) to speak at a university. They gather by the hundreds to scream F-bombs at those with whom they suspect they disagree on issues related to politics and government. They’ve firebombed Republican Party offices; shut down college campuses; thrown eggs at and spit on Trump supporters; fired gunshots at and punctured tires of cars with Trump bumper stickers. One of them shot a congressman at a baseball practice in D.C. Another shot several people at the Family Research Council headquarters in D.C. after being informed by the Southern Poverty Law Center, the preeminent purveyor of politically-inspired hate, that the pro-family organization, like so many other conservative and libertarian organizations, was supposedly a “hate group.”  They often cover their faces with masks, wear helmets, and show up at public events armed with clubs, baseball bats, and guns.

“They believe that the ends justify the means, the opposite of traditional morality, because they are self-proclaimed socialists and communists.  They carry signs identifying themselves with Socialist International, Democratic Socialists of America, and other far-left communistic groups. When they vandalized the 225-year-old memorial to Christopher Columbus in Baltimore they videotaped the scene with a message condemning Columbus for bringing “European capitalism” to America, the greatest of all crimes.

“They are clamoring for the demolition of the Washington Monument, Jefferson Memorial, and Mount Rushmore. Like the Taliban that has destroyed hundreds of religious monuments, they seek to destroy all monuments to Western civilization, which they have been taught is the root of all worldly evil.

“Many of them are extreme bigots and ignoramuses, loudly proclaiming that all white people, regardless of their character and behavior, are “Nazis,” “white supremacists,” or worse. They call for nothing less than genocide of “white European civilization.” For the past several decades, they have claimed that heir guiding philosophy is the philosophy of “inclusion.” Of course, by “inclusion” these totalitarian-minded professional rioters mean using force and violence to impose their will on all of society. The vast majority of them, according to television and internet images, appear to be young twentysomethings or “millennials.”

In a similar observation, New York University professor Jonathan Haidt, in an article titled “The Cultural Roots of Campus Rage,” shares his insights into what’s happening on many a college campus across the nation.

In the article, Haidt speaks of the campus mobs and riots at universities across the nation including Berkeley, Yale, Brown, and Middlebury. He describes the underlying ideology as “a new religion” that is increasingly filling the void in our post-Christian culture. From the article he asserts:

These [new religious] believers are transforming the campus from a citadel of intellectual freedom into a holy space — where:

White privilege has replaced original sin. The transgressions of class and race and gender are confessed not to priests but to “the community.” Victim groups are worshiped like gods.

The sinned-against are supplicated with “safe spaces” and “trigger warnings.”

For these leftist mobs, reality is defined entirely within the Marxist framework of oppressor and oppressed. Further, the principal oppressors are white, Christian or Jewish heterosexual males. They are uniquely oppressive, “white supremacists” who have abused cultural power and privilege at the expense of every other group.

If you are not white, male, Christian/Jewish, heterosexual, you are, by definition, a victim, and victimization accrues power. Ben Shapiro explains how this works: [The toxic new religion] ranks the value of a view not based on the logic or merit of the view but on the level of victimization in American society experienced by the person espousing the view. An LGBT black woman is automatically considered more correct than a straight white male, before any speech exits either of their mouths.

Haidt continues, If a straight white male, or anyone else who ranks lower on the victimhood scale, says something contrary to the viewpoint of the higher ranking intersectionality identity, that person has engaged in a “microaggression.” They have engaged in “hate speech” or “violence,” and violent action is justified to silence them.

Scott Allen rightly observes: “This is the same totalitarianism of the Maoist Cultural Revolution or the Russian revolution! When you jettison the truth — Christian morality and a biblical worldview — this is what you get. Raw power.

“This set of tactics to fight so-called victimization is increasingly used beyond college campuses as well, in places like Ferguson Missouri; Baltimore; Portland, Oregon; Chicago and elsewhere. It is powered by a vast array of revolutionary networks, enabled by social media, and underwritten by incredible amounts of money provided by far-left donors and foundations.

“The goal is to disrupt and silence foes.

“If this new religion gripping our college campuses and the larger culture continues to grow and expand, not only in the west, but around the world, I fear it will result in similarly destructive ends. Out of a love for our neighbors, and in a desire to faithfully carry out our mission to bless the nations, this new ideology must be understood and resisted. We must tenaciously cling to the truth, live it out, and in doing so, demonstrate a better way.”