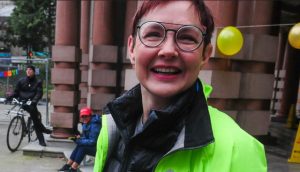 What could possibly be the worst thing, politically, that could happen to the city of Portland after being ravaged for three months by violent protests and looting led by Black Lives Matter supporters and radical left-wing Antifa members?

How about weak-kneed Mayor Ted Wheeler being replaced with an actual Antifa member? What a nightmare that would be, right?

Well, as it turns out, there’s a possibility it could actually happen.

Left-wing activist Sarah Iannarone is facing off against incumbent Democratic Mayor Ted Wheeler in a runoff election on November 3 after neither candidate was able to receive a majority of votes in the first round of voting. Terrifying possibility, folks.

Wheeler beat Iannarone in the first round of voting, but has faced criticism from both sides of the political spectrum over his handling of the city’s nightly unrest, which has included nearly 30 riots since late May. A supporter of President Donald Trump was shot and killed Saturday night during a pro-Trump demonstration in Portland.

Trump has criticized Wheeler for not embracing federal assistance to quell the city’s riots, while left-wing activists have accused Wheeler of being too tough on demonstrators. Local progressive activists have called for Wheeler’s resignation, but the mayor has said he has no plans to step down.

Iannarone, whose platform includes a “Housing for All” plank and a pledge to slash the city’s police funding, identified herself as a member of the Antifa movement in a January 2019 tweet.

“To those who say Antifa are violent thugs: I am not a violent thug and I am Antifa,” she said in a written piece.

I am Antifa because the Red Hats are coming after brown & black people, after Jews, after queer & trans people, and more.

They are coming after our democracy. #HolocaustMemorialDay #NeverForget

This is insanity, folks. The last thing this poor city needs is someone who will essentially pave the way for Antifa to rule Portland to be sitting in a position of power and authority.