ANTIFA PROFESSOR that promoted violence doesn’t like that he’s now being threatened! 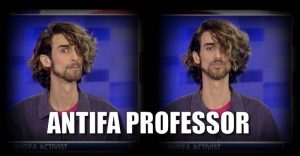 A New York professor and Antifa member who bragged that he was teaching “future dead cops” now doesn’t like the fact that he’s receiving violent threats.

Professor Michael Isaacson, who works in the economics department at the CUNY Manhattan college, tweeted, “Some of ya’ll might think it sucks being an anti-fascist teaching at John Jay College but I think it’s a privilege to teach future dead cops.”

Threats of violence against anyone are unacceptable but it is a little difficult to to find sympathy for Isaacson.

During his appearance on Tucker Carlson last week, Isaacson argued that violence is acceptable, so long as the victim has odious beliefs. Quite a subjective standard if you ask me!

He received many insults based on his physical appearance such as his hair or extremely long neck.

Isaacson has recently been placed on administrative leave due to his comments. He also might have a little trouble getting help from law enforcement if the threats ever became real. I’m sure our men and women in blue would step up and do the right thing as usual. I could imagine the response time being a little delayed, however.

If you missed the interview you can see it below.