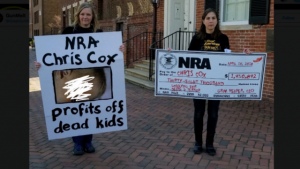 Liberals have such a funny way of protesting. They love to make a lot of noise, a lot of big spectacle, and a lot of angry comments, and often violence. But when they’re held accountable for criminal acts, they always seem surprised.

An anti-gun professor from the University of Nebraska-Lincoln was found guilty this week for her repeated harassment and vandalism of an NRA lobbyists home, and at the trial was served another warrant for a separate act of vandalism for which she will again have to stand trial.

Patricia Wonch Hill, a research assistant professor of sociology, pled not guilty to misdemeanor destruction of property, but upon being found guilty was ordered to pay a thousand-dollar fine and to stay 500 feet away from the residence of NRA chief lobbyist Chris Cox.

The incident occurred in January 2018, when Hill, who was caught on surveillance cameras, sprayed fake blood all over the Cox family home. This came after months of repeated confrontations and “protests” outside the home as well as the interior design business owned by Cox’s wife, The Daily Caller reports.

“We are pleased that today Ms. Hill was criminally convicted of vandalism for her January attack on the Cox’s home, that she was charged with a second count of vandalism for an attack on the Cox family home in October 2017, and that a restraining order was entered against her,” the Cox family lawyer, Elizabeth Locke, told The Daily Caller. “The Cox family is grateful to the Commonwealth Attorney’s office and the Alexandria Police Department for their role in holding Ms. Hill accountable for her criminal conduct. We look forward a second conviction for Ms. Hill at her next criminal trial.”

The Daily Caller, who was in court for Hill’s trial, tried to get a statement from her, and this was how she reacted:

Melody Vaccaro, vice president of Nebraskans Against Gun Violence, was a little more talkative, and was able to give a good couple of ranty minutes of audio to The Daily Caller before being pulled away by Hill’s lawyers:

These people think they can break the law to make a statement against guns, but also think that more laws will prevent people from using guns to kill people.