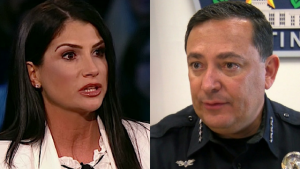 Houston Police Chief Art Acevedo got more than he bargained for when he ended up in a head-to-head Twitter battle with spitfire NRA spokeswoman Dana Loesch after relentlessly trolling the gun rights advocacy group and publically expressing his dedication to disarming American citizens.

“It all started when Acevedo wrote a controversial Facebook post with strong Democratic overtones that said that he was ‘not interested’ in the public’s views on gun rights because, as he suggested, guns are ‘the problem,'” reports The Daily Wire’s Ryan Saavedra.

“That message and some of Acevedo’s other far-left stances on issues drew the attention of Loesch, who called him out over it,” he explains.

Acevedo, a far-left Democrat whose Twitter account features a pinned tweet from the Houston’s Women’s March and retweeted videos from Now This about other far-left democrat police chiefs in favor of disarming American citizens, had been railing against the NRA on Twitter as well, it appears, when a segment from Loesch’s NRA TV show called him out, which was then tweeted by the NRA.

“You don’t even honor immigration laws, so how can we expect you to honor and respect the Second Amendment and the laws governing,” she said in her segment on Acevedo’s ranting against the gun rights group.

.@DLoesch to @ArtAcevedo: "You don't even honor immigration laws, so how can we expect you to honor and respect the Second Amendment and the laws governing #2A." #NRA pic.twitter.com/ZwrqN6miTB

To which he nearly incoherently fired back, “Another lie keep it up. You have deep pockets. Bye forever or until we meet in court.”

Another lie keep it up. You have deep pockets. Bye forever or until we meet in court.

So now criticizing someone’s political platform is illegal? He didn’t stop there, either. His incoherence fully intact, he made a very bizarre comment about “watching” Dana, and clearly wasn’t prepared for what came next.

Lastly, I will not respond any further to you on any platform outside of a legal process. Be on notice that we will be watching and will do our talking in a court of Law if the need arises. Good day. https://t.co/xGKhMfaDqq

Dana is famous for never backing down from a fight, whether that’s in twitter or in a courtroom, and Acevedo went one step too far. His creepy threat to “be on notice we are watching you,” as Dana laid out, potentially admitted to something illegal.

I forgot to ask this last night @ArtAcevedo : when you told me that “we will be watching” (as a result of you disliking my remarks on your reported-on support of sanctuary city policies), are you using the resources of the Houston PD to watch me? AM I under surveillance? https://t.co/VG5U2M5rdu

Hi @houstonpolice , appreciate you. Your chief said he was “watching me” after my criticism of his reported-on sanctuary city support. I’m just curious what your SOP is on monitoring speech and whether these thoughts are shared. Thank you for your time. https://t.co/CIClq8Ve6b

Reached out to @houstonpolice re the thread below where @ArtAcevedo says “we will be watching” after I criticized his stance on sanctuary cities. I want confirmation if taxpayer dollars are being used to surveil citizens who criticize political appointees’ public remarks. https://t.co/15kzl9eNp8

As it relates to Acevedo’s promise to “watch me,” I’m particularly curious how his behavior squares with Texas Penal Code 39.03. https://t.co/kMMXv8WDYp