Angry Man Pulls Out Bat On Subway And Threatens Passenger. It Was A Huge Mistake 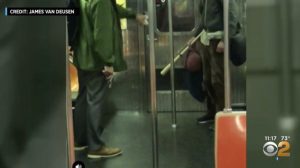 David Morales was on the subway for his commute to work when a nearby passenger seemed to lose his mind and started flipping out.

Morales said that his bag must have somehow touched his bag or something of that nature, combined with the guy just having a really bad day, because he soon erupted, brandishing a baseball bat.

Here’s how the whole thing unfolded, via TheBlaze:

“What you don’t see in the video, he did take the bat out, and he did put it behind his back for a swing…” Morales added to the station, noting that the man began to threaten “consequences.”

At that point, Morales said his training kicked in. His police training, that is.

See, Morales is a retired NYPD detective who spent 28 years with the department — and as part of his present job with the city’s administration for children’s services, he’s licensed to carry a firearm, WCBS said.

And when the man with the bat threatened violence, Morales told the station “that’s when I said, ‘Okay, I’m in trouble here’ and took out my gun to make sure that he would stay away from me.”

After Morales pulled his gun, the man decided he wasn’t going to take a swing. Morales then told the man in the video that he was a police officer and that he was under arrest.

The bat-wielding man, Brian Baksa, is believed to be homeless and was arrested and charged with menacing and criminal possession of a weapon.

As you can see folks, being a police officer is pretty dangerous off the clock just as much as it is when you’re on the clock. Thankfully, this man erupted on a police officer who was equipped and trained to handle such individuals and not a regular civilian. Things could’ve been much, much worse.

Here’s the video of the incident: