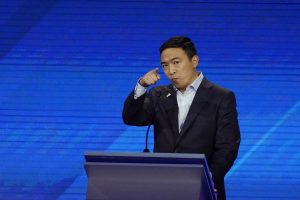 The 2020 Democrat presidential race devolved into a contest to see who is the least criminally insane megalomaniac of the bunch a long time ago, and it’s been my dubious pleasure to report on their foibles when I can stomach it.

As a result, like most of us, I find myself thinking about which of these folks I could actually stand to call my President (should the Lord withhold his mercy) without having a stroke.

Don’t get me wrong, I’m no centrist and not a single one of these people will ever have my vote, just in case that needs to be said. Still, just like we expected the snowflakes to grow up and accept the fact that Donald Trump is their lawfully-elected president, we need to at least be prepared to do the same.

It’s possible that Andrew Yang could be one of those folks who, as President, wouldn’t send me into a fit of apoplexy. While the young entrepreneur supports ridiculous things like a universal basic income (read: getting paid to exist,) he’s remarkably sane on one key issue that has utterly decimated my ability to take the modern left seriously: political correctness.

Where others are tripping over themselves to outwoke eachother, Yang seems pretty cool about the issue of political correctness.

We know we’re on the same team. We all have a better vision for health care than our current president, and I believe we’re talking about this the wrong way. As someone who has run a business, I know that our current health care system makes it harder to hire people, makes it harder to give them benefits and treat them as full-time employees – you instead pretend they’re contractors. It’s harder to change jobs; it’s certainly harder to start a business. The pitch we have to make [to] the American people is, we will get the health care weight off of your backs and then unleash the hopes and dreams of the American people.

I am Asian, so I know a lot of doctors, and they tell me that they spend a lot of time on paperwork, avoiding being sued, and navigating the insurance bureaucracy. We have to change the incentives, so instead of revenue and activity, people are focused on our health in the health care system, and the Cleveland Clinic, where they’re paid not based upon how many procedures they prescribe, shocker, they prescribe fewer procedures and patient health stays the same or improves. That is the pitch to the American people.

While Yang is clearly no Jim Gaffigan (and isn’t trying to be, obviously), I did come dangerously close to wrecking another laptop from laughing and spitting out my coffee on that one.

If you’d like a commentary on Yang’s healthcare plan juxtaposed with those of his Dem opponents, this ain’t the place. He triggered entirely too many of his fellow Dems on this one for me to let that controversy go to waste.

Making a joke that reinforces the model minority myth and plugs into Asian stereotypes is disgusting. It’s not funny, and you’re doing a disservice to a community you claim to identify so strongly with.

Uhm, could we please stop reinforcing the model minority myth on a national debate stage? Not only does it flatten away the diversity of AsAm experiences into a joke, but it is also rooted in anti-blackness.

How dare Yang flatten the diversity of Asian American experiences by joking that he knows a lot of doctors. The audacity!

Of course, for every Asian person having a conniption fit over Yang’s joke, there were three more Asian folks saying stuff like this:

“I am Asian and I know a lot of doctors” says @AndrewYang. Lousy Asian! You’re supposed to BE the doctor. Not know them.

Now that one was a side-splitter.

This incident predates a bigger one over the weekend in which Yang insisted that the words of Shane Gillis, a new Saturday Night Live cast member who called him a “Jew chink,” “should be taken in a slightly different light”.

“There have been a number of reactions to my call for forgiving Shane Gillis,” Yang said on CNN’s State of the Union. “I’ve experienced a lot of anti-Asian racism throughout my upbringing and it hurts. It’s something that’s very real. I do think anti-Asian racial epithets are not taken as seriously as slurs against other groups.”

But, echoing a series of Tweets, the tech entrepreneur added: “At the same time, bigger picture: I believe that our country has become excessively punitive and vindictive about remarks that people find offensive or racist.

“We need to try to move beyond that, if we can, particularly in a case where the person … [is] like a comedian whose words should be taken in a slightly different light.”

Well now, how about that for some sanity?