And Just Like That, the 2016 Election Was Reversed…TDS Sweeping America 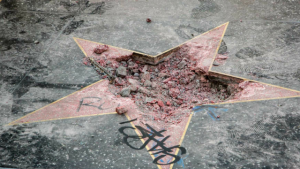 There is no doubt that the progressive left is coming completely unhinged as Trump’s time in office continues.

But rather than calm down and cope with reality, nearly two years later, they seem to be more upset than ever, clearly unable to handle the fact that Trump is still in office, has not been impeached, and hasn’t started a nuclear war.

They’re determined, with every move he makes, to twist what he’s doing into the biggest catastrophe our nation has ever faced, but all they ever succeed at doing is ginning up the public against him.

So now you have stinky twenty-somethings camped out in the street calling for ICE to be abolished and men taking pickaxes to Trump’s Hollywood star.

In case you missed it, last week, a man walked up to Trump’s star on the Hollywood Walk of Fame and proceeded to completely destroy it with a pickaxe. His girlfriend later described him as having a “major issue with Trump.”

What exactly the man, 24-year-old Austin Clay, was hoping to accomplish by smashing the star, which has already been replaced, is unclear.

Clay was, however, as TMZ explains, bailed out by a man who also took a pickaxe to the star in 2016.

You might recall, James Otis attacked Trump’s star in 2016 — also with a pickax — and we’ve learned he’s now stepping up to pay the $20k bail for Austin Clay … the 24-year-old who went off on Trump’s star early Wednesday morning,

We’re told Otis isn’t just writing a check either — he also plans to meet Clay in person as soon as he’s released. We’re guessing he might want to discuss technique, ’cause Clay’s was way more destructive effective.

James, who is the Otis elevator heir, avoided hard time after pleading no contest. Instead, he got 3 years probation, 20 days of community service and had to pay $4,400 to replace the damaged star.

Seriously, though, did they think the 2016 election would just be reversed or something if the star was destroyed?

I think this really does speak to what a bubble progressives live in. While the rest of the world ticks on whether or not Trump’s star is destroyed, they place so much faith in arbitrary physical symbols like a star on the Hollywood Walk of Fame, they actually think they’re doing some sort of brave act by committing pointless acts of vandalism.

This is why Hollywood is more than happy to pontificate in front of glamourous audiences at glitzy award shows about their brave progressive politics, but when it comes to real life, they’re completely clueless and disconnected about the issues affecting most Americans.

It’s almost as if they’re just happier having a President to demonize so they can puff themselves up on their own perceived virtue, and, like so many angry young men before him, Otis cares much more about simply being angry and destructive than he does about actually effecting any kind of positive change in his world.