An Uppity BBC Exec Jabbed Monty Python Comedians For Their Race, Their Response Is Perfect 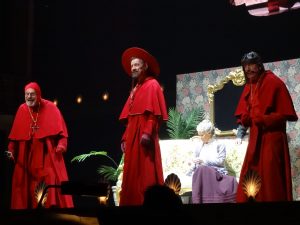 Utter lack of consideration of historical context, a maniacal devotion to some kind of artificial, forced societal diversity, and a group of white dudes cornered into defending their own honor simply because of the color of their skin. What is this insanity we’re living in?

It’s… 2019, of course! And not even our most beloved entertainers from years gone by are safe from the woke mafia.

In this latest edition of Someone’s Gotta Be Offended About Something, comedy’s the victim. To be clear, comedy of any variety (especially stand-up) has long been the black sheep of the entertainment industry, forever pushing the boundaries of political correctness. While our culture has long since gotten over the shock of hearing S-bombs and F-bombs and all the other bombs you can think of (thanks, George and Lenny), it’s time for something new and fresh to be offended about: a lack of diversity—ethnic or otherwise.

Over at the BBC (the propaganda wing of Europe’s leftist empire), the idea that diversity must be forced on entertainment offerings has crawled into the mind of its Controller of Comedy Commissioning, Shane Allen, who recently announced a slate of the network’s comedy show offerings.

After a little bit of boasting about the demise of the white male’s relevance in society and praising his all-female commissioning team, Allen was asked about Monty Python, the iconic comedy troupe comprised of Terry Gilliam, Eric Idle, John Cleese, Graham Chapman, Michael Palin, and Terry Jones.

“If you’re going to assemble a team now it’s not going to be six Oxbridge white blokes,” Allen said. “It’s going to be a diverse range of people who reflect the modern world.”

It didn’t take long for word to get out on that little island that the “white bloke” is officially a relic in British comedy. Terry Gilliam, Python’s token American and the genius behind too many films to name, got wind of Allen’s annoyingly puffed-up shot and did what anyone would do: mourn the state of the world Allen’s statements indicate.

Except, of course, in an epically hilarious fashion and not without taking a jab himself at today’s leftist insanity. The Guardian reports:

Speaking at a press conference at the Karlovy Vary film festival, where he was presenting his new film The Man Who Killed Don Quixote, Gilliam said: “It made me cry: the idea that … no longer six white Oxbridge men can make a comedy show. Now we need one of this, one of that, everybody represented… this is bullshit. I no longer want to be a white male, I don’t want to be blamed for everything wrong in the world: I tell the world now I’m a black lesbian… My name is Loretta and I’m a BLT, a black lesbian in transition.”

He added: “[Allen’s] statement made me so angry, all of us so angry. Comedy is not assembled, it’s not like putting together a boy band where you put together one of this, one of that everyone is represented.”

John Cleese, the man responsible for my children’s confusion every time I feel the urge to walk around the house in the silliest manner possible, also took the opportunity to set Allen straight in a tweet:

Unfair ! We were remarkably diverse FOR OUR TIME

We had three grammar-school boys, one a poof, and Gilliam, though not actually black, was a Yank. And NO slave-owners

Sorry, Sir Cleese, that’s 2019 for ya. We live in a world that has completely cast off its past, so we don’t have any historical context with which to accurately examine and judge relics of the past, including what counted for “diversity” back then.

It wouldn’t be too far off base to say that comedy in the mainstream is dead, and it wouldn’t “voom” if you put four thousand volts through it.

Let’s face it, if pitched to teams like Allen’s today in 2019, most of our favorite comedians and their entertainment offerings would be panned on the spot for being offensive, microaggressive, or simply just having too many white folks. Try The Lumberjack out on the diversity police (especially in the age of the transgender movement) and see what happens.

Even shows as recent as The Office would probably never make it to a ninth season—in fact, I bet we’d probably see online petitions and a resultant apology from NBC if “Diversity Day” aired in 2019.

As Ben Shapiro so succinctly explained, what the mainstream entertainment industry has replaced true, unsanitized comedy with is mere “clapter”: the delivery of political opinion and propaganda in a humorous tone that elicits more affirmation and clapping than it does genuine laughter.

Sadly, the only thing funny about all this is just how seriously the BBC takes itself.