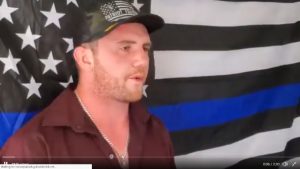 An alleged witness to the horrific shooting death of right-wing protester Aaron Jay Danielson in Portland over the weekend said that he and the victim were targeted, “hunted” by what he says were left-wing Antifa members after they were spotted sporting Patriot Prayer hats.

This is further escalation of violence that comes hot on the heels of an incident in Kenosha, Wisconsin where a 17-year-old boy killed two people after they chased him while he was attempting to protect a business from being looted.

“We’ve got a couple of ’em right here, pull it out, pull it out!” the alleged witness recounted them saying, during an interview posted to YouTube by The Common Sense Conservative on Saturday.

“They executed my partner, they hunted him down, they hunted us down,” he recalled. “They recognized our Patriot Prayer hats.”

Some individuals believe that Patriot Prayer is a racist far-right group, but founder Joey Gibson has been adamant about denouncing white supremacy for many, many years.

The witness went on to say that he’s afraid there’s going to be more bloodshed due to that folks on social media who continue to provoke violence and whip people up into a frenzy with their posts on platforms like Facebook and Twitter.

Jay was executed for being a Trump supporter. pic.twitter.com/AmnA1hLhXq