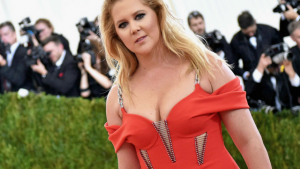 Maybe her cousin Chuck can find her a job in politics.

Amy Schumer, the comedienne who made a name for herself with profanity-laced “comedy” routines about her own promiscuity, binge-drinking, and weight, has not surprisingly tanked yet another film in what can only be chalked up to her tone-deaf tirades against at least half of the people she’s hoping will pay to see her movies.

The Daily Wire’s Paul Bois notes that recently-released latest film, “I Feel Pretty”, underperformed at the box office on its opening weekend, pulling in a scant $16.2 million.

“While the film performed slightly above original projections ($15 million), the ticket sales break just a little over half of its $32 million budget. Of that $16.2 million, half the sales go to the movie theater, which means Schumer’s body-image comedy brought in just a little over $8 million this weekend. Add the costs of marketing and distribution on top of that and the movie is dead in the water,” Bois explains.

Despite the fact that Schumer is not exactly funny and has had a series of flops over the last few years, she clearly thought it more expedient for her career to down “one-too-many martinis with sycophantic leftists in the Hollywood cocktail,” as Bois puts it, rather than actually work on her craft and try to be, you know, funnier.

As her box office success floundered, she put her efforts into backing cousin Chuck Schumer’s gun control agenda, joining the far-left Women’s March, and bashing Trump and Trump supporters so brutally during her routine that she actually got booed at her own show by over 200 people who ended up walking out.

It’s also worth noting that this latest release, “I Feel Pretty”, a film about a woman who hits her head and suddenly believes that she’s drop-dead gorgeous, entertains conflicting ideas about body image and Western beauty standards. She claims it’s about being comfortable in her own skin, and yet her character’s confidence greatly boosted when she believes she looks like a supermodel, i.e. is suddenly ignorant to her own homeliness. So what is it? Is she comfortable in her own skin, or does a woman like Amy Schumer need to be subject to severe head trauma in order to convince herself she’s beautiful?

Of course, in a brilliant display of leftist cannibalization, Schumer is being criticized for some serious intersectional fails. In the Independent, she was ripped up and down by some grumpy lady (or…person…) for her inability to recognize “her own privilege”, i.e. the fact that she’s still blonde, only a size 12, and…wait for it…able-bodied.

Tsk, tsk, Amy…someone clearly has not been keeping up to date on the latest in intersectional self-flagellation.

Schumer’s hatred for such a significant cross-section of potential movie audiences as well as her failure to please the High Priests of Intersectional Politics has clearly manifested itself in ticket sales and reviews, as last year’s “Snatched” garnered only $19 million and her highly-anticipated and highly-disappointing Netflix special received notoriously abysmal ratings, a fact she blamed yet again on those evil, evil Trump supporters.

Sorry, lady! There is no single Trump supporter in the world powerful enough to cover up the fact that you’re simply not funny, and the beautiful free market has, as it often does, the final say.

Maybe next time, try to be a little funnier and insult your audiences a little less, and see if that does the trick!