Amid Other Ban-Happy States, Oklahoma Becomes A Sanctuary State For Plastic Bags 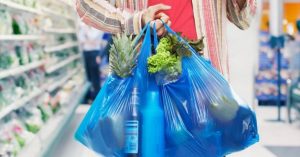 As a New Yorker, I’m uncomfortably well-acquainted with everything being either taxed-to-death or simply banned. Coastal states like mine just love to ban all the things, especially all the plastic things.

Oklahoma’s latest ban, however, is one I wholeheartedly support: a ban on bans. A ban ban, if you will.

Specifically, the Sooner State passed a law preventing single-use plastics like grocery bags from being banned in any of its towns or cities.

“I want to make sure I make it easy for industry to do business in Oklahoma,” said Okie Governor Kevin Stitt after signing Senate Bill 1001 into law earlier this week.

The bill, which prevents municipalities from banning or putting a tax on containers made of materials such as cloth paper, cardboard, aluminum,  glass, and that evil nasty awful rotten plastic, is the complete antithesis to the bag bans and taxes being passed in states duped by the green agenda. It’s beautiful.

SB 1001 was drafted in response to a move made by the city of Norman to mimic New York and impose a 5-cent tax on plastic grocery bags.

“They are not good for the environment,” said Lynne Miller, who may sound like a fifth-grader but is actually the mayor of Norman. “They blow all over the place. The plastic bags do a lot of damage to the equipment and [that’s] gonna drive up the cost of recycling.”

According to KFOR, Miller says the money raised from the bag tax would have gone to “educate Normanites on the dangers they pose to the environment”. Exactly how that “education” would have gone down is anyone’s guess. Maybe in the form of super eco-friendly soy ink-printed posters made from paper sourced only from sustainable forests?

“I just don’t think that we should be putting laws and rules on business from 500 municipalities,”said Stitt, noting the nightmare such a regulatory “patchwork” would be for enterprises who wish to do business in the state but have to adopt different policies for every single city.

“If they want to have a plastic straw or they want a plastic bag to help carry their groceries at the retail level, we want to make sure that businesses have that capability in our state,” said Mike Jackson, Executive VP of Government & Political Affairs for the State Chamber of Oklahoma.

Making your state more hospitable toward economy-boosting, job-providing businesses while avoiding taxing your citizens to death over every little thing? What a novel idea!

When New York finally passes a tax on breathing (which should be any day now), I’ll certainly keep Oklahoma in mind.