AMERICANS — With No Hyphenations Allowed! 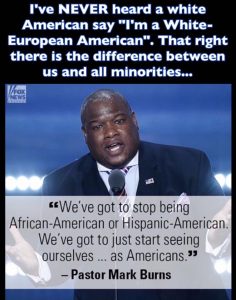 Walter Williams, the brilliant American economists, whose skin happens to be black demonstrates how confusing all the attempts at political correctness have become: How liberals identify black people must be confusing to whites. Having been around for 77 years, I have been through a number of names. Among the more polite ones are colored, Negro, Afro-American, black and, more recently, African-American. Among those names, African-American is probably the most unintelligent. Let’s look at it. To identify their races, suppose I told you that I had a European-American friend, a South America-American friend and a North America-American friend. You’d probably say, “Williams, that’s stupid. Europe, South America and North America are continents and home to different races, ethnicities and nationalities.” You might suggest that my friend is a German-American instead of European-American. My friend from Brazil is a Brazilian-American rather than a South America-American, and my friend from Canada is a Canadian-American instead of a North America-American. So wouldn’t the same apply to people whose heritage lies on the African continent? For example, instead of claiming that President Barack Obama is the first African-American president, he’s the first partially Kenyan-American president. Obama is lucky; he knows his national heritage. The closest thing to a national identity for most black Americans is some country along Africa’s Gold Coast. Adding to the confusion, what would you call a white American of Afrikaner or Egyptian descent? Is he an African-American?

A white American teacher tells of a conversation he had with a brilliant student that asked the following: “Coach, when white folk get mad, they turn red. When they sick, they turn green. When they can’t breathe, they turn blue. When they stay in the sun too long, they turn brown. Why ain’t y’all called colored people? I’m always black.”

Bob Marley said that the end of racism will be when one’s skin color will be as unimportant as one’s eye color? Would anyone ever feel that some eye colors are inferior and need a better name to make up for it?

Some time ago, Whoopi Goldberg, the comedian-actress whose skin happens to be black caused some debate when she told Raven Symone a co-host on “The View” not to be called an African-American.

Where does dark skin begin, and light skin end? Does the color of our skin make us of a different race? No, there is only one race– the human race!

Dr. Harold Page Freeman, chief executive, president, and director of surgery at North General Hospital in Manhattan, reiterates, “If you ask what percentage of your genes is reflected in your external appearance, the basis by which we talk about race, the answer seems to be in the range of 0.01 percent.”

In other words, the so-called “racial” differences are absolutely trivial —  overall, there is more variation within any group than there is between one group and another. If a white person is looking for a tissue match for an organ transplant, for instance, the best match may come from a black person, and vice versa. ABC News claims, “What the facts show is that there are differences among us, but they stem from culture, not race.”

Professor Thomas Sowell, an American whose skin happens to be black was right when he said, “America is the greatest, freest and most decent society in existence. It is an oasis of goodness in a desert of cynicism and barbarism. This country, once an experiment unique in the world, is now the last best hope for the world.”

With all our cultural diversity, we must recapture the words of Lee Greenwood’s popular song of days gone by: And I’m proud to be an American where at least I know I’m free and I won’t forget the men who died who gave that right to me. And I gladly stand up next to you and defend her still today cause there ain’t no doubt I love this land — God bless the USA.

ALL AMERICAN CITIZENS ARE  AMERICANS PERIOD!

I am an AMERICAN with no hyphenation allowed! In that reality and incredible blessing, I bow my unworthy head and humbly, thankfully, declare I am proud to be an American and ask God to go on blessing this land I love.