I pray my sons will demonstrate this level of respect for the rest of their lives.

On Sunday, a shooter opened fire from the 32nd floor of a hotel in Las Vegas on a country music festival below, killing at least 59 and injuring hundreds. Of those shot and hospitalized was Thomas Gunderson. 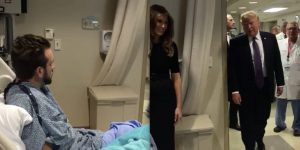 Then, on Wednesday, President Donald Trump and Melania flew to Las Vegas to meet with victims and came across Gunderson in the hospital. The next moment that was captured and posted on Facebook is something he will likely always remember.

As the president and first lady entered his room, Gunderson stood up, despite being shot in the leg to greet the two with the upmost respect.

The caption of the video that Gunderson posted on Facebook read:

“I will never lie down when the President of this great country comes to shake my hand! There may be plenty of issues in this country but I will always respect my country, my president and my flag. Shot in the leg or not, I will stand to show my President the respect he deserves!”

Nazi Pelosi Repeatedly Violates Her Own Mask Edict; Will She Be Arrested? (Video)
Conservative Firing Line

No articles were found at this time.

Hunter Biden Lashes Out At His Critics, Says ‘F*** ‘Em’

Michael Cantrell - July 30, 2021
Hunter Biden, son of President Joe Biden, lashed out at critics of his current artwork during an interview he conducted Thursday with the folks...

Rep. Keller Says That Biden’s Actions Are In Conflict With ‘Buy...