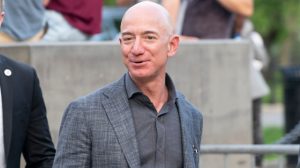 According to new reports, some bankers are speculating that the richest man in the world, Jeff Bezos, the owner of Amazon and the Washington Post, might be looking to buy out CNN.

The purchase would reportedly cost somewhere around $10 billion, but that’s chump change to Bezos who is reportedly worth $193 billion. In other words, this is a deal he can afford no problem.

However, a person close to Bezos says there’s been “zero talk on this,” denying the rumor completely.

CNN is owned by AT&T; “AT&T, which bought Time Warner for $85 billion in 2016, has been saddled with tens of billions of debt, and its shares have fallen by more than 31 percent this year,” The Daily Mail noted. A banker told FOX that AT&T is shying away from “controversial’” content; the banker added, “No one really has qualms about Turner Classic Movies, but CNN is a lightning rod and you know why, particularly with Republicans.”

Rich Greenfield of LightShed Partners speculated that other potential buyers of CNN include CBS News (ViacomCBS) and NBC News (Comcast). He stated, “It’s not shocking to see this corporation want less exposure to the news (division) but I’m a little surprised CNN would be the only asset to be sold given they have a much stronger digital platform than the rest of Turner’s properties.”

Senator Josh Hawley (R-MO) had a blunt response to the rumor that Bezos might purchase CNN: “One word to this: No.”

Can you imagine this man having that much cultural power over the masses in our country? He would be in charge of two of the largest mainstream media outlets that exists today, giving him the power to shape narratives that influence people’s behavior and voting patterns on an unprecedented scale.