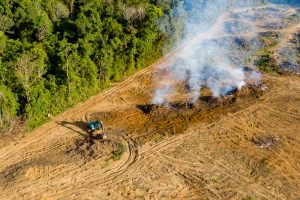 Politicians and celebrities have been playing “scientist” with environmentalism for decades now, but they’ve finally found a crisis they seem to hope will rally even the staunchest skeptic to the cause: rainforest fires in the Amazon.

Our house is burning. Literally. The Amazon rain forest – the lungs which produces 20% of our planet’s oxygen – is on fire. It is an international crisis. Members of the G7 Summit, let's discuss this emergency first order in two days! #ActForTheAmazon pic.twitter.com/dogOJj9big

In an editorial for Forbes, Michael Shellenberger, a Time Magazine “Hero of the Environment” and Green Book Award Winner, works to set the record straight.

Referring to the photo shared by Macron (and others such as Leonardo DiCaprio), Shellenberger notes that the photo is over 20 years old. Not only that, he points out that soccer star Cristiano Ronaldo has been sharing a photo that was actually taken in southern Brazil, nowhere near the Amazon, in 2013 as well as tweeting, “The Amazon Rainforest produces more than 20% of the world’s oxygen.” Even Madonna and Jaden Smith shared a photo that was over 20 years old.

After taking a quick moment to debunk the misleading photos floating around the internet, Shellenberger proceeds to drop an A-bomb on the notion that Earth’s lungs are burning with a little help from Dan Nepstad, president and founder of Earth Innovation Institute and co-founder of The Amazon Environmental Research Institute.

Having spent his career working toward the sustainable development of the Amazon since 1995, Nepstad is a voice to hear well on the issue.

Although shining examples of journalism such as CNN and the New York Times pointed out “Deforestation is neither new nor limited to one nation” and “These fires were not caused by climate change,” respectively, Shellenberger asks Nepstad his thoughts on the claim that the Amazon is the “lungs” of the world: “It’s bullshit. There’s no science behind that.”
Well now, drop a dollar in the swear jar and tell us how you really feel, sir!
“The Amazon produces a lot of oxygen but it uses the same amount of oxygen through respiration so it’s a wash,” Nepstad said, continuing to shred the official story.

Nepstad proceeded to answer a claim from the NYT that, “If enough rain forest is lost and can’t be restored, the area will become savanna, which doesn’t store as much carbon, meaning a reduction in the planet’s ‘lung capacity.’”

“The Amazon produces a lot of oxygen, but so do soy farms and [cattle] pastures,” Nepstad responded.

“We don’t know if there are any more forest fires this year than in past years, which tells me there probably isn’t,” Nepstad added, noting that many of the fires in the Amazon are hidden by the dense tree canopy. “I’ve been working on studying those fires for 25 years and our [on-the-ground] networks are tracking this.”

“Macron’s tweet had the same impact on Bolsonaro’s base as Hillary calling Trump’s base deplorable. There’s outrage at Macron in Brazil. The Brazilians want to know why California gets all this sympathy for its forest fires and while Brazil gets all this finger-pointing,” Nepstad stated. “Brazilian farmers want to extend [the free trade agreement] EU-Mercosur but Macron is inclined to shut it down because the French farm sector doesn’t want more Brazilian food products coming into the country.”

“What is happening in the Amazon is not exceptional. Take a look at Google web searches search for ‘Amazon’ and ‘Amazon Forest’ over time,” Leonardo Coutinho, a leading Brazilian environmental journalist, said to Shellenberger. “Global public opinion was not as interested in the ‘Amazon tragedy’ when the situation was undeniably worse. The present moment does not justify global hysteria.”

Share this story far and wide if you think the world needs to hear the truth about the latest global warming crisis!