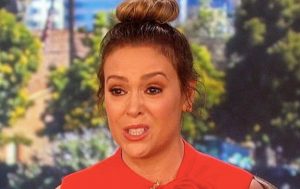 She just yearns to live in a world where Trump supporters are racists and gay black men walk the sub-zero, streets of Chicago (in the heart of MAGA country) afraid for their lives.

She dreams of a world where every leftist narrative plays out in real life, where she has fewer rights than a man because of her va-jay-jay and young white supremacists join the KKK en masse.

Where even wealthy Hollywood actresses like herself are brutally oppressed by orange dictators that force women to wear hoods and red robes in public.

Reality hit the starry-eyed dreamer hard this week, when it turned out that “modern-day lynching” victim Jussie Smollett was, in reality, victimizing the entire left-wing media, the majority of 2020 Dem contenders, and Twitter keyboard warriors like Milano with their own preferred narrative of a terrifying right-wing dystopia.

It turns out that Trump supporters aren’t going around hunting down black gay men in polar vortexes (vortexi?) to put nooses (noosi?) around their necks after all.

And Alyssa can’t even handle this harsh reality check.

If that man staged his own attack he is wrong in so many ways.

No one could be that hurtful? To stage this? Right?

To fuck with all of us by playing into our weaknesses & make it even harder for victims to come forward?! No one could choose to be that hurtful? Right?! RIGHT?

Ironically, she seemed to be a lot calmer about the whole thing when it still corresponded with her preferred worldview:

I’ve been trying to figure out all day what to say about the racist, homophobic, violence against @JussieSmollett.

Not sure I can describe what I’m feeling in a neat & tidy tweet. His trauma deserves more.

I’m sad. Living together on the planet shouldn’t be this difficult.

It is pretty funny that Alyssa thinks it’s impossible for anyone to be hateful enough to stage a hate crime, but she does think that someone could be hateful enough to rove the freezing streets of Chicago at 2 AM to find some gay black actor to beat up (I mean, most Trump supporters are always prepared with a noose and bleach, right?)

In reality, she is of course, quite right that is pretty abominable for someone to stage this, for the precise reason that it undermines when real “hate” crimes happen.

Crime is crime and assaulting someone whether you dislike the color of their skin, sexual orientation, political affiliation, or gender is all equally heinous and should never be tolerated by a civil society.

What also should not be tolerated by a civil society is the kind of worldview that would rather a hate crime be real than staged because of identity politics.