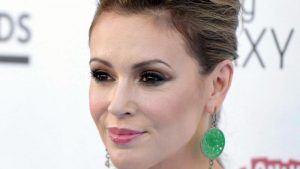 Alyssa Milano is at it again, that is to say, she never really stops whining about all the hardships of being a left-wing Hollywood star, she just got particularly upset this week.

If you’ve been following the news, you’re no doubt aware that the libs are currently all in a tizzy over the women and children that look extraordinarily like mostly military-aged males who tried to peacefully and lawfully walk across the Southern border in a manner that confusingly resembled violently storming an entry point while throwing rocks at LEOs.

It must have been a really weird camera angle. From fifteen different cameras that captured the event.

At any rate, these “women and children” got pepper sprayed, and it’s basically like the holocaust all over again, so you can imagine Milano along with the dedicated warriors of the keyboard outrage brigade were tweeting up a storm.

Milano’s looked something like this (warning: coarse language because homegirl was TRIGGERED):

You tear-gassed women and children, asswipe! And on Thanksgiving weekend, you piece of shit, asshole, motherfucking, evil-creature-person!! https://t.co/ngaAlnhWa0

In case you were not aware, the amount of curse words you use in a single tweet is always in direct proportion to how virtuous and compassionate you are, so Milano is clearly a saint as she is impressively demonstrating here.

What have we become? https://t.co/9GERGPFFT1

By “we” do you mean whoever would actually bring children along with an angry mob to storm an entry point of the nation with the most powerful military on the planet? Because if so, yeah, seriously, what are we doing? That seems like a really, really bad idea (spoiler: it’s not quite what it looks like.)

Unfortunately for Alyssa, all her virtue signaling was no match for Twitter.

“Twitterers immediately schooled Milano,” the Daily Wire explains, “noting that then-president Barack Obama had pepper-sprayed demonstrators there when a similar assault on the border occurred in 2013.”

2013: "A group of about 100 people trying to illegally cross the border Sunday near the San Ysidro port of entry threw rocks & bottles at U.S. Border Patrol agents, who responded by using pepper spray & other means to force the crowd back into Mexico, federal officials said." pic.twitter.com/78SGfElqMQ

Hey @Alyssa_Milano, I would've taken your outrage seriously if you and your merry band of Hollywood hypocrites had spoken out when Pres. Obama was dropping bombs on women and children. https://t.co/zsLjgaws0Q

Never mind the hyperbole, can you imagine a has-been actor who directed this sort of abuse at Obama being given a platform on MSM? https://t.co/JuWAAis3fH

I hate to inform you of this, honey, but tear gas is not a weapon. Its used to avoid the need to use weapons. And the targets weren’t the stupid women who had their children standing amongst a group of men throwing rocks at border patrol agents – it was the men.

Turns out those “women and children”, the few who were among the crowd, weren’t so innocent either.

This is one side of the story, dont use this image without posting the complete information.
The people came through Tijuana border in bunches trying to get in .. They had to do this for everyone. The parents where using the kids as shield's. Look up the news.