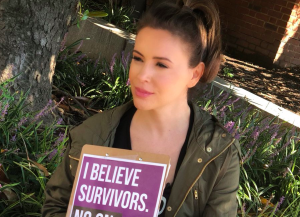 It must be great to be Joe Biden. Being at the tippy-top of the Democrat cartel certainly has its perks. All the women you can fondle and sniff, plus a cache of celebrities and pundits to defend you at every turn.

The latest ultra-leftist mouthpiece to come to Creepy Uncle Joe’s defense is—drumroll, please—Alyssa Milano! I know, I know, you’ve fainted from the shock.

The ex-child star (ex-star, for that matter) proudly carried on the Democrat tradition of defending the downtrodden and abused, except of course in cases where the abuser is one of their own.

After being the most embarrassingly vocal member of the #MeToo lynch mob against SCOTUS Justice Brett Kavanaugh, her defense of Handsy Joe is too insane to ignore.

So, according to the Democrat playbook, when the subject is a conservative, Trump-nominated Supreme Court candidate, all due process gets tossed in the compost and we use dubious, uncorroborated testimony to politically assassinate our enemies. Noted.

But, in 2019, when one of her best buds becomes the subject of sexual misconduct claims, it gets a little sticky for Milano:

I am proud to call Joe Biden a friend. He has been a leader and a champion on fighting violence against women for many years, and I have been fortunate to accompany him to events with survivors where he has listened to their stories, empathized with them, and comforted them. pic.twitter.com/cI0jsKlu3P

Believe me, folks, I’m trying to work up a shred of sympathy for this woman. Maybe, just maybe, she’s so thoroughly duped by leftover haze from the glory days of the Obama presidency that she just can’t think straight. I really want to have pity for someone so clearly deluded, but then she just keeps going:

3. Biden started Its On Us because he believes to meaningfully change our culture, everyone – including those often left out of the conversation like college athletes and fraternity brothers – needed to be part of the movement.

So, the lipservice Biden has paid to legitimate abuse survivors absolves him of his own sins? Alyssa, come on now. Pop some gingko and think a little harder.

5. I respect Lucy Flores' decision to share her story and agree with Biden that we all must pay attention to it. But, just as we must believe women that decide to come forward, we cannot assume all women's experiences are the same.

Call off the crusade, y’all. The guy who gropes girls and women and inhales their hair on camera “never meant to make anyone uncomfortable”, and his non-apology makes him the very model of leadership. We can pack it in and go home, Milano’s got it all under control.

6. I believe that Joe Biden's intent has never been to make anyone uncomfortable, and that his kind, empathetic leadership is what our country needs. Especially now.

Thankfully, a barrage of dedicated Twitter users were on the scene to make Milano aware of the mountain of footage featuring Biden publicly grabbing, fondling, and shoving his face into the hair of women and young children which, frankly, was just too sickening to share here.

While I don’t expect she has the decency to hear dissenters out and watch the video clips of Biden’s grabby creep-fest, her obnoxious voice shedding more light on Creepy Uncle Joe and Dem hypocrisy seems to be backfiring. Parading their double standard for the world to see, libs like Milano are doing their part to kill any chance Biden has in 2020. Praise the Lord for that!